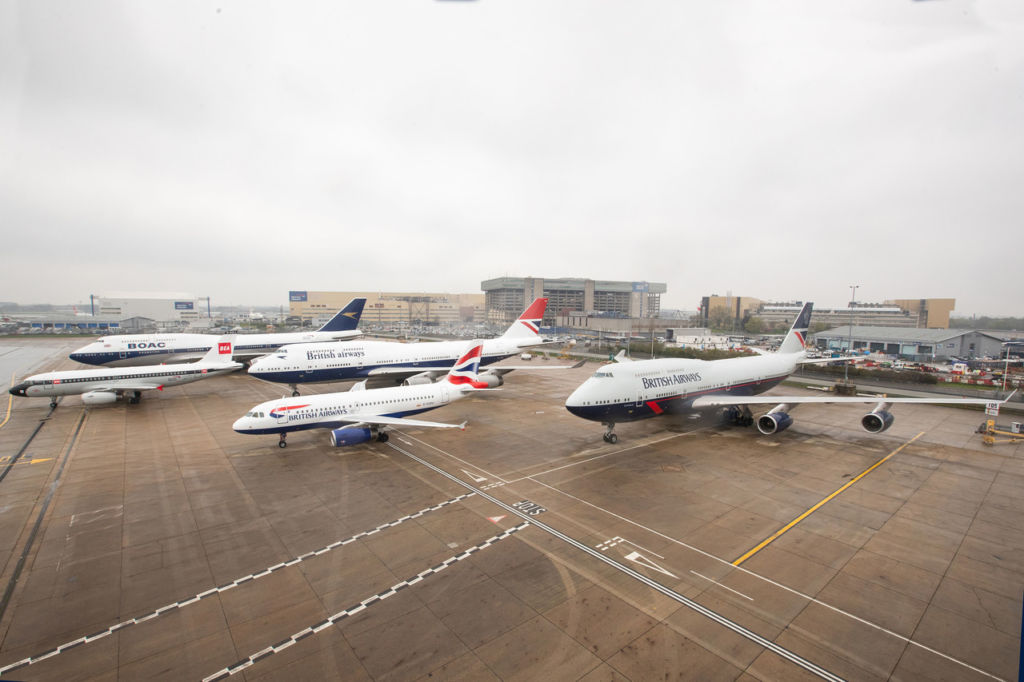 British Airways has, for the first time today, brought together its four heritage liveried aircraft which were repainted to mark the airline’s centenary this year, alongside an A319 in the current Chatham Dockyard livery, to capture a rare image of some of the airline’s most iconic designs together.

The photos captured today also mark the fact that 50,000 customers have already flown around the globe on the four heritage liveries since they re-joined the fleet, with the Boeing 747s having travelled to destinations such as New York, Cape Town, Dubai and Lagos, while the BEA liveried Airbus A319 has flown far and wide across the airlines’ UK and European network to cities including Manchester, Newcastle, Edinburgh, Milan, Zurich and Amsterdam.

Alex Cruz, British Airways’ Chairman and CEO, said: “The excitement and pride that we’ve witnessed from customers and colleagues as these heritage liveries, which we painted to mark our centenary, have flown around the globe has been unparalleled.

“Social media has been fired up with images from travellers all over the world when they’ve spotted the aircraft and as some 50,000 people have now flown on them since they arrived back in the fleet we wanted to capture a special photo to share with them.”

To capture the photo, the four heritage aircraft, which were in scheduled downtime and parked at the airline’s engineering base, were lined up alongside an aircraft with the current Chatham Dockyard design.

The painstaking process of arranging them for the photo took over two (careful) hours.

The retro designs are part of a special series to mark British Airways’ centenary, as the airline celebrates its past while looking to the future and can be followed using tracking website Flightradar24, which features special images of the aircraft.

In this, its centenary year, British Airways is hosting a range of activities and events. As well as looking back, the airline is also hosting BA 2119 – a programme, which will lead the debate on the future of flying and explore the future of sustainable aviation fuels, the aviation careers of the future and the customer experience of the future.

The centenary activity is taking place alongside the airline’s current five-year £6.5bn investment for customers. This includes the installation of the best quality WiFi and power in every seat, fitting 128 long-haul aircraft with new interiors and taking delivery of 72 new aircraft. The airline has also revealed a brand-new business class seat with direct aisle access, the Club Suite, which will debut on the Airbus A350 later this year.

Allegro Passenger Numbers up by 18.8%