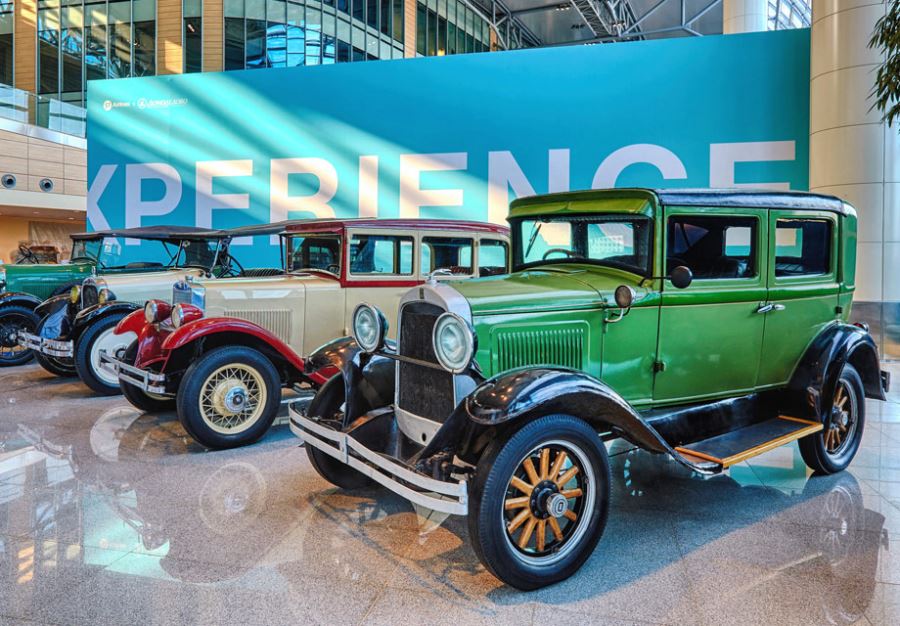 S7 Airlines, a member of the oneworld® global aviation alliance, together with the Moscow Domodedovo Airport, are offering travelers a chance to take a fresh look at the terminal space and are inviting them to a pop-up retro-car show. It is available in the new atrium of the domestic airlines, where, thanks to the original architectural design of the facade, natural light prevails, creating ideal conditions for an exhibition.

Travel is a constant movement in which we always strive to find something new: experience, impressions, emotions. The airport is the starting point for many trips and at the same time a meeting spot of the world cultures, a hub for thousands of stories. The retro car show in the airport’s arrival area turns it into a modern museum, where different eras meet on one platform.

The show features 24 cars and 2 motorcycles produced in the 1920s or 1930s, including models from leading French, American, Italian and German manufacturers. The Domodedovo terminal features the first serial models of Citroen, Peugeout, Chevrolet, Ford, Dodge, Pontiac, Fiat, Opel, as well as rare representatives of Chenard & Walcker, Delahaye, Micahel Irat and others.

Travelers will be able to see some iconic cars that have made the history. For example, Renault NN, which Vladimir Mayakovsky bought for Lily Brik and dedicated the “In Response to Future Gossips” poem to, or Fiat Valencia 505, which the Queen of United Kingdom chose for her tour of Rome in the 20s.

Air tickets can be purchased at s7.ru, through the iPhone app or the Android app, and at any S7 sales office. You can also learn accurate flight information, book and buy tickets by calling our Contact Centre at 8 800 700–0707 (free for Russia).

S7 Airlines (a brand of Sibir Airlines, www.s7.ru) is a member of the oneworld® global aviation alliance.

The airline has a wide network of domestic routes, with their home base at the air transportation hubs in Moscow (Domodedovo) and Novosibirsk (Tolmachevo). S7 Airlines operates regular flights to the CIS countries, Europe, the Middle East, Southeast Asia and the Asia-Pacific region.

In 2007, the airline was formally notified by IATA about being accepted to the IOSA (IATA Operational Safety Audit) operators list and became the second air carrier in Russia to successfully pass the entire international audit procedure for compliance with operational safety standards.

Currently, S7 Airlines has the most modern fleet of aircraft in the Russian air transportation market. All the flights of the airline are operated on aircraft of the world’s leading manufacturers — Airbus, Boeing, Embraer.

S7 Airlines is included in the list of the TOP-100 best airlines in the world and ranks third in Eastern Europe according to the reputable international rating Skytrax.

S7 Airlines has been repeatedly awarded the Cannes Lions advertising festival prize for its projects, and has received “My Planet” national award for its innovations in the field of travel.

The airline is a member of the S7 Group of companies. In 2018, the airline group carried more than 15.9 million passengers.

The Moscow Domodedovo Airport is one of Russia’s largest air harbors. Domodedovo has been chosen by members of the world’s leading aviation alliances, Star Alliance and oneworld, for their flights to Moscow. Domodedovo is the only Russian airport that regularly services the Airbus A380 and Airbus A350-900.