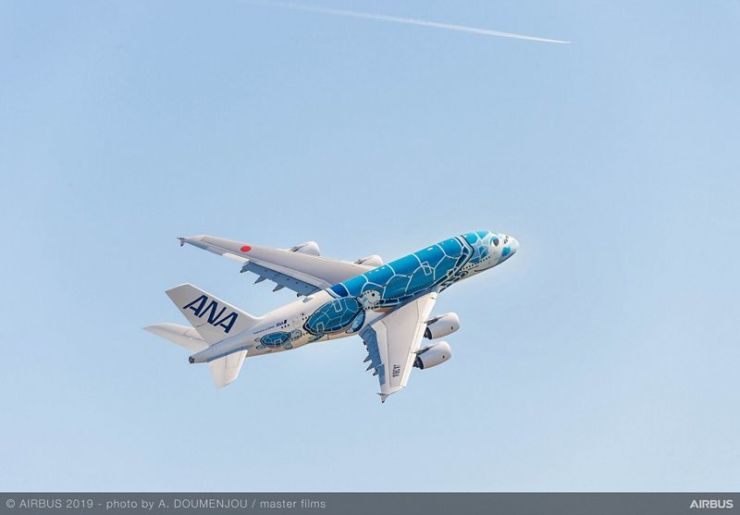 All Nippon Airways Takes Delivery of Its First A380

Japan’s All Nippon Airways (ANA) has taken delivery of its first A380 at a special ceremony in Toulouse, becoming the 15th operator of the world’s largest passenger aircraft. The delivery ceremony was attended by ANA HOLDINGS President and CEO Shinya Katanozaka and hosted by Airbus CEO Tom Enders.

ANA has ordered three A380s and will operate the aircraft on the popular route between Tokyo Narita and Honolulu from 24 May. Each ANA A380 will feature a special livery depicting the Hawaiian Green Sea Turtle, also known as the Honu. The livery on the first aircraft is painted in blue, while the second will be green and the third orange.

“We will commit all three of our Airbus A380 to the Tokyo-Honolulu route with the goal of introducing a new level of luxury service to our passengers flying ANA on the number one resort route for Japanese travelers,” said Shinya Katanozaka, President and CEO of ANA HOLDINGS INC.

“We believe the A380 will become a game changer for ANA and will enable us to increase our market share by doubling the number of seats connecting Honolulu and Tokyo by 2020,” he added. “The FLYING HONU is designed to offer unprecedented comfort and convenience and a world of new possibilities to ANA passengers, something that would not have been possible without the combined efforts of the Airbus and Rolls-Royce teams working closely with the dedicated professionals at ANA.”

“Airbus is proud to deliver this beautiful aircraft to ANA,” said Airbus CEO Tom Enders. “Offering unrivalled levels of passenger comfort, the A380 will enable ANA to increase its capacity on the busy route to Hawaii with maximum efficiency. We are confident that the aircraft will be highly successful in service with ANA and are committed to providing full support to the airline all along the way.”

The A380 offers airlines the most efficient option to meet demand on the world’s most heavily travelled routes. It is also firmly established as the aircraft of choice by passengers worldwide, offering more personal space in all classes, a super-quiet cabin and smooth ride. Around 250 million passengers have already flown on the aircraft.

Following today’s delivery to ANA, there are currently 232 A380s in service with 15 airlines worldwide, flying on 120 routes across the globe.

A380 All Nippon Airways

Gulf Air has officially introduced a new pricing concept of its air fares to make it easier and clearer to its passengers regarding what’s included in each price bracket. The new ‘Boutique Fares’ come in 3 branded...

TUI UK has put winter 2021/22 holidays from Bristol Airport on sale and will launch summer 2022 from 5th November, with thousands of free kids’ places, low deposits from £75 per person and £0 deposit on direct debit...

Germany’s most popular leisure airline says “Hello Switzerland”: Condor is stationing two Airbus A320s in Zurich for the 2021 summer season and will then fly to nine of the most popular vacation...