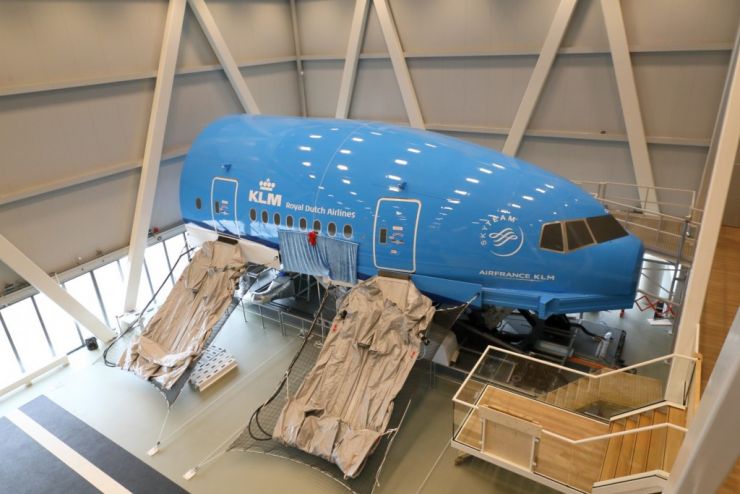 KLM today opened a brand-new training facility, which is equipped with two new Cabin Emergency Evacuation Trainers (CEETs) made from real Boeing 737 and 777 equipment. The 777 is operated by a motion system, which has been especially designed for KLM. The new technologies make cabin and cockpit crew training much more realistic and better tailored to the purpose. The training facility was opened by KLM COO, René de Groot.

Both CEETs have the capacity to fully simulate flights visually, because all the windows have been replaced with LED screens. This makes training sessions more realistic and adaptive. Every emergency scenario can now be simulated with greater accuracy, which increases the didactic efficiency of the training sessions. For example, the 737 and 777 CEET can simulate fire at 13 different locations, including smoke and actual heat.

During basic training and refresher training with simulators, attention will be paid to further improving cooperation between cabin and cockpit. This is possible, because these simulators have cockpits. In addition to their standard training in the cockpit, pilots will receive extra training every three years in these new simulators. Cabin crew will be given annual training in the new CEETs.

Names unveiled
Just as aircraft all have names, so do simulators. René de Groot unveiled the names of the new CEETs: “Het Amsterdamse Bos” and “De Krullevaar”. Sustainability was also a major consideration when purchasing this equipment. The combination of hydraulic and electric drives means 80% less energy is used than in the old situation. These simulators also require less oil.

The training facility will be put into immediate use, but the new training hall will be expanded in the months ahead and a new Fire Trainer installed. This simulator can simulate fire and is where crew practice extinguishing. There will also be a whole floor dedicated to training in Virtual Reality. The training hall is expected to be fully operational by the end of the summer.