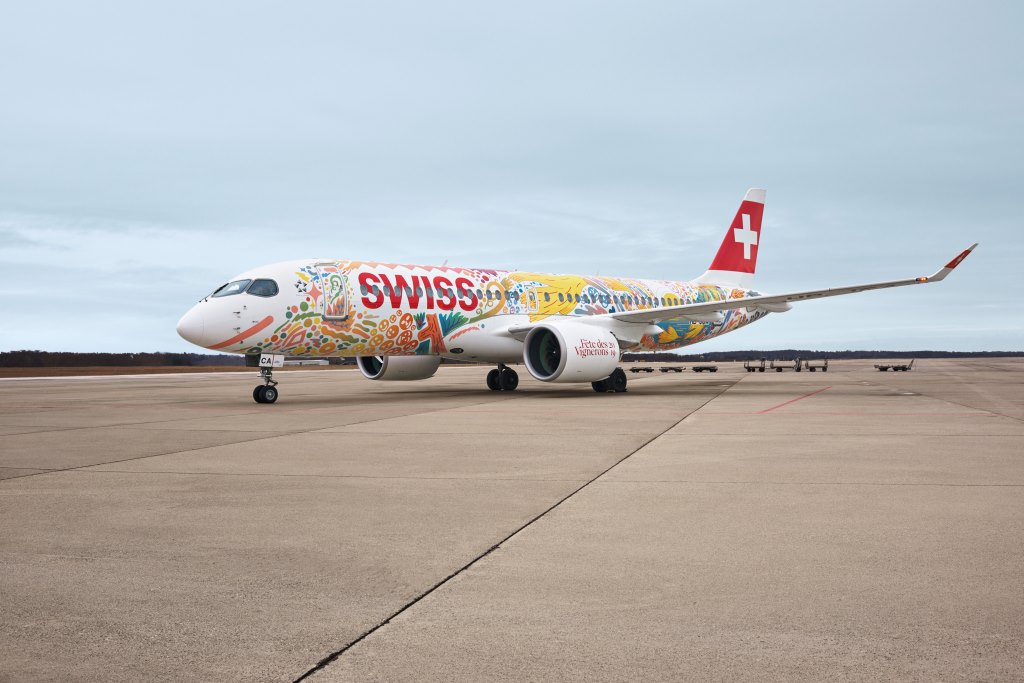 SWISS is further underscoring its strong commitment to Western Switzerland – the French-speaking “Romandie” – by serving as principal partner to this year’s Fête des Vignerons in the region. As part of this collaboration, The Airline of Switzerland has also given one of its Geneva-based CS300 aircraft a special “Fête des Vignerons” livery.
Swiss International Air Lines (SWISS) unveiled one of its advanced CS300 aircraft at Geneva Airport today that has been given a special livery to honour and highlight this summer’s Fête des Vignerons festival in Vevey in Western Switzerland, for which it is principal partner. The livery has been designed by Western Swiss artist Mathias Forbach (alias Fichtre) to mark this long living tradition. Festival director Daniele Finzi Pasca paid tribute to Fichtre’s artistic creation by serving as the “godparent” to the newly-reliveried aircraft. The unveiling was also attended by Vaud State Councillor Philippe Leuba and Geneva State Councillor Serge Dal Busco.
SWISS, a proud partner of Fête des Vignerons 2019
As The Airline of Switzerland, SWISS is proud to support this exceptional festival event and to put the colours and images of the Fête and its region onto one of its aircraft, which will carry them all over Europe. “It’s very important to us to show our guests the character of our home country: its culture and its traditions, from which we draw our inspirations every day,” says Lorenzo Stoll, SWISS’s Head of Western Switzerland. “The natural riches and the savoir-faire of our regions are very much part of that. And this is why we have chosen to pay our own tribute to the Fête des Vignerons, which is such an embodiment of the Romandie.”
A once-in-a-generation experience, the Fête des Vignerons is a celebration of the winegrowing tradition of Western Switzerland. The globally unique event, which is organized by the Confrérie des Vignerons, has been on the UNESCO Intangible Cultural Heritage List since 2016. Almost a million visitors from Switzerland and beyond are expected to attend this summer’s month-long Fête, which will be held in the town of Vevey.
“This winged messenger of the Fête des Vignerons 2019, decked in the colours concocted by Vevey artist Fichtre, is about to undergo its baptism aloft,” enthuses François Margot, Abbé-Président of the Confrérie des Vignerons. “Tradition, innovation, hospitality and an openness to the world: these shared values of our airline and our UNESCO-recognized festival will now shine out far and wide. And we could not wish for a fresher, more original ambassador of the air!”
A flying tribute created by a Romand artist
SWISS already dedicated its first CS300 aircraft – “L’Avion des Suisses Romands” – to Western Switzerland and its inhabitants back in 2017. The company is now underlining that commitment to the Romandie by commissioning another special livery to mark the Fête des Vignerons, a celebration that will move and delight the people of Western Switzerland and beyond later this year.
To ensure a certain consistency between “L’Avion des Suisses Romands” and the newly-decorated aircraft, SWISS has again turned to Western Swiss artist Mathias Forbach, alias Fichtre, to design the new livery. The choice is even more appropriate in that the artist is from Vevey, where the Fête will be held.
Fichtre’s guiding goal for his new livery creation was to awaken the memories of the last generation which experienced the Fête des Vignerons and to arouse the interest of a new generation with a modern and contemporary design. With its spontaneous, colourful and festive style, the new livery captures the spirit of the Fête and draws its inspiration from many of the features that make it so unique.
The colours and images used reflect the cycle of the seasons that give their natural rhythm to the winegrowing world. Nature features strongly in Fichtre’s livery composition, which has incorporated elements of the local Vevey landscape such as Lake Geneva, the vines, the autumn leaves and (of course) the grapes.
The start of a European journey
The specially-liveried SWISS CS300 will be deployed throughout Europe over the next nine months. The aircraft will serve 42 destinations from Geneva including Palma (in summer), St. Petersburg (in winter) and Dublin (all year round). And it will carry over 150,000 passengers in its festive colours.
Mathias Forbach
Mathias Forbach (Fichtre) was born in Vevey in 1983. He attended the Lausanne University of Art and Design (ECAL), graduating in 2005 with a Bachelor’s Degree in Media & Interaction Design. Since 2009 he has been teaching at the School of Design and University of the Arts in Sierre in Canton Valais. And in 2012 he decided to continue his own artistic education by following the Work.Master programme at the Haute École d’Art et de Design (HEAD) in Geneva. In 2014 he co-founded the STADIO art space in Vevey together with Joëlle Nicolas, Guillaume Ehinger and Jacques Duboux. He was awarded a Master of Visual Arts degree in 2015.
Tags: new livery Swiss
Read Previous