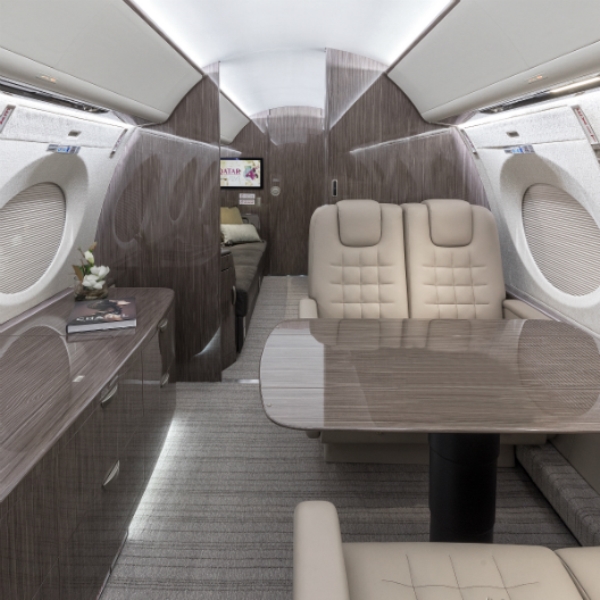 The G500 jets are one of the fastest and most advanced aircraft types in the Qatar Executive fleet. The state-of-the-art jet sets a new industry benchmark by offering one of the quietest cabins, as well as having the best cabin altitude pressure, allowing for unparalleled passenger comfort.

The G500 is powered by the next generation Pratt & Whitney Canada PW800 engines, optimised for high-altitude, fast and long-range jets. In addition to being one of the most efficient jets in the industry, the aircraft’s remarkable range makes it capable of travelling non-stop from Istanbul to Cape Town; Los Angeles to London; and San Francisco to Tokyo.

The cabin contains the most advanced technology including satellite communications, high-speed internet, the Oryx One entertainment system, wireless local area network and Gulfstream’s Cabin Management System, which allows passengers to use their own personal electronic devices to control audio, video, lighting, temperature, window shades and other cabin functions.

The brand-new executive jet was first unveiled by Qatar Executive on the opening day of Farnborough International Airshow 2018.

Qatar Executive currently operates a fleet of 15 state-of-the-art private jets, including five Gulfstream G650ERs, two Gulfstream G500s, three Bombardier Challenger 605s, four Global 5000s and one Global XRS. In 2019, Qatar Executive is set to receive an additional five G500s, as well as one G650ER jet, for which it is the largest commercial operator worldwide. The expanding fleet allows the private jet charter division to serve all crucial markets efficiently and in a way that VVIP customers can enjoy an unparalleled level of service and product from any global destination.

Qatar Airways is one of the world’s fastest-growing airlines, with a modern fleet of more than 200 aircraft flying to business and leisure destinations across six continents.