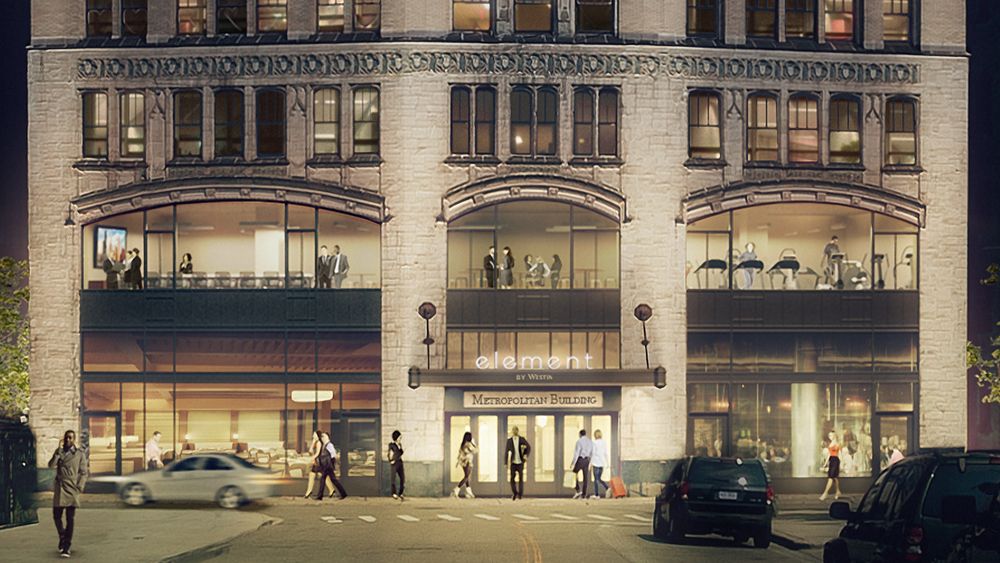 Element Hotels along with Detroit-based Roxbury Group and Means Group, announced today the opening of Element Detroit at the Metropolitan, marking the debut of the stylish and eco-focused hotel brand in Michigan. The hotel, which has been incorporated into a renovated 92-year-old neo-Gothic building in the heart of Detroit’s entertainment district, aims to fuel a balanced life for travelers on the road. Designed for today’s healthy, active traveler, Element Hotels has redefined the longer stay experience with a nature-inspired design philosophy that is clean, modern and bright.

The Metropolitan Building, was originally opened in 1925 and previously was a destination for jewelers and shoppers alike. The Element Detroit at the Metropolitan boasts 110 studio and one-bedroom guest rooms. The hotel will also be home to a rooftop bar and patio, The Monarch Club at The Metropolitan, with private event space and unparalleled views of downtown Detroit and Comerica Park, the home of the Detroit Tigers. The Monarch Club will be the first of three food and beverage venues to open in the building, and is slated to debut in the first quarter of this year. The property is being managed by Azul Hospitality of San Diego, Calif.

Care was taken throughout the renovation process to preserve as many of the original features of the building as possible, including the exterior façade, an ornate vaulted ceiling in the interior lobby, interior decorative stair cases, and original terrazzo flooring on the guest corridors. The original storefronts of the jewelry stores have also been preserved on the second floor and repurposed as meeting rooms.

Element Hotels aim to allow guests to maintain a healthy and active lifestyle while on the road by offering a complimentary RISE breakfast every morning featuring a yogurt station, a fresh range of whole fruits, and more. Those looking to keep up with their fitness routine can enjoy the 830-square-foot Motion Fitness center, open 24/7. Guests can also take their workout offsite while enjoying the local scenery via Element’s Bikes to Borrow program, which is run in partnership with Priority Bicycles. Complimentary bikes are available upon request for guests to enjoy during their stay. Notable nearby attractions include Campus Martius Park, Ford Field, the Fox Theatre, the Fillmore Detroit, Little Caesars Arena, Beacon Park, the Detroit RiverWalk and Eastern Market. For those looking to unwind after a long day, the hotel offers Element’s signature RELAX reception hour, where guests can enjoy complimentary organic beer, wine, soft drinks and appetizers.