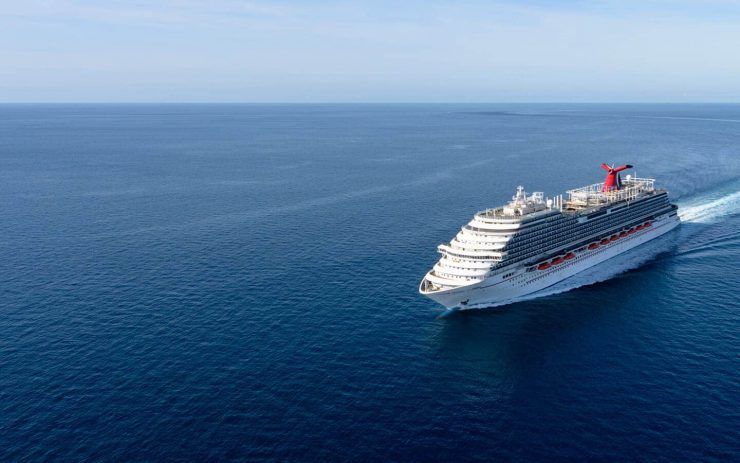 The world will get a preview of one of these spectacular new vessels when Carnival Cruise Line debuts a floral replica of its new Carnival Panorama sailing down Colorado Boulevard in the Rose Parade on New Year’s Day, beginning a year-long celebration of its first new ship based in California in 20 years, scheduled to begin sailing from its homeport of Long Beach in December 2019. The float will include many of the signature features of the brand’s ships – including the red and blue funnel, a water park and Lido Deck party – as well as the line’s newest feature, the first-ever trampoline park at sea, in partnership with industry leader Sky Zone.

Additionally, as a replica of the Carnival AirShip flies over the float, fitness enthusiasts will be jumping into the fun on a Sky Zone trampoline built directly into the front of the float. And celebrating its role as the cruise line that carries the most military personnel, Carnival Cruise Line’s float also salutes the brave men and women of the Armed Forces with a special appearance by former Miss USA, Deshauna Barber, godmother of Carnival Panorama’s sister ship, Carnival Vista, and the first active member of the military to serve as Miss USA.

The new vessels also include Sky Princess, Princess Cruises’ fourth Royal-class ship; and Costa Smeralda, the second of Carnival Corporation’s total of 11 new ships joining the fleet between 2018 and 2025 that can be powered by liquefied natural gas (LNG) both in port and at sea; as well as Costa Venezia, Costa Cruises’ first ship designed and built specifically for the China market.

The four ships are part of Carnival Corporation’s ongoing fleet enhancement strategy with 20 new ships scheduled for delivery between 2019 and 2025 – creating excitement in the vacation market and helping the company’s brands continue to provide a great vacation experience while accelerating demand for cruising, the fastest growing segment in the vacation industry.

These new ships build on the success of Carnival Corporation’s four ships launched in 2018, which include Carnival Horizon from Carnival Cruise Line, Seabourn Ovation from Seabourn, ms Nieuw Statendam from Holland America Line and most recently, AIDAnova – the world’s first cruise ship that can be powered by LNG both in port and at sea – from AIDA Cruises.

Carnival Panorama from Carnival Cruise Line – Expected Launch Date in December 2019
When the new Carnival Panorama arrives in Long Beach next December, it will become the brand’s first new ship to homeport in California in 20 years, sailing year-round voyages from the newly renovated Long Beach Cruise Terminal to the Mexican Riviera.

On January 1, 2019, Carnival Cruise Line will preview a floral replica of the ship to 700,000 spectators at the 130th Rose Parade in Pasadena, California, as well as a worldwide television audience of more than 80 million parade fans. With tens of thousands of flower petals meticulously applied by hand, the float’s signature touches will include flowers from more than 100 countries to represent the number of nations that the brand’s employees hail from, as well as fitness enthusiasts jumping into the fun on a Sky Zone trampoline taking center stage on the 55-foot-long float.

The 4,008-passenger, 133,500-ton Carnival Panorama is the third in the line’s highly successful Vista-class series, the largest ever constructed for Carnival Cruise Line, which includes Carnival Vista and Carnival Horizon. The three ships are all named to reflect the connection between the vessels and the sea. Carnival Panorama will feature a wide variety of fun indoor and outdoor experiences for a unique seagoing vacation, including popular features such as the tropics-inspired Havana section, Family Harbor with extra-roomy staterooms and the Family Harbor Lounge, a massive WaterWorks aqua park, the luxurious Cloud 9 Spa and the SportSquare recreation area.

Carnival Panorama is scheduled to debut on December 11, 2019, with a special three-day inaugural cruise from the Long Beach Cruise Terminal, which is housed in a massive 146,000-square-foot geodesic dome that once served as home to Howard Hughes’ Spruce Goose airplane. Most California residents and the surrounding area live within a day’s drive of the port. Year-round, seven-day Mexican Riviera cruises begin December 14, departing Long Beach every Saturday to stunning destinations along the Mexican Riviera, including Cabo San Lucas, Mazatlán and Puerto Vallarta.

Sky Princess from Princess Cruises – Expected Launch Date in October 2019
Sky Princess will carry 3,660 guests and include the best of the stunning features found on its three Royal-class sister ships – Royal Princess, Regal Princess and Majestic Princess – as well as new offerings that represent an evolution of the current ships’ designs, with new innovations designed to exceed guests’ expectations.

New to Sky Princess are spectacular Sky Suites, centrally located on the top deck. Measuring 700 square feet and with a 270-degree panorama, the suites feature the largest private balconies at sea with a prime view of the ship’s Movie Under the Stars screen. Sky Suites have sleeping capacity for five guests and plenty of room for entertaining, making them ideal for families and celebrations.

The 143,700-ton Sky Princess is designed to offer more ways for guests to unwind, with a new contemporary design for its relaxing adults-only Sanctuary area, and twice as many private cabanas as its sister ships. Also new for Sky Princess will be the addition of a Wakeview pool on its aft decks, plus two new deep-tank top deck pools, a restorative Retreat Pool and more Jacuzzis than previous Royal-Class ships, including two cantilevered over the deep-tank pools.

Other ship highlights will include a soaring central Piazza-style atrium, the iconic Seawalk, Princess Live! entertainment venue with a new café, Camp Discovery youth and teen centers, and a wide variety of guest-favorite dining venues with updated décor and design throughout the ship. Guests will also be able to enjoy the new look of the ship’s Vista Lounge complete with a full bar offering, an evolution of the popular lounge on other Princess ships.

The inaugural Mediterranean deployment of Sky Princess is set to feature 10 cruise departures on eight unique itineraries, beginning October 20, 2019, with a seven-day Mediterranean and Adriatic cruise from Athens (Piraeus) to Barcelona. On November 17, the ship is scheduled to set sail from Barcelona for Fort Lauderdale, where guests will enjoy tropical holidays in the Caribbean before the ship returns to tour Europe beginning in April 2020.

Costa Venezia from Costa Cruises – Expected Launch Date in March 2019
For Costa – the first international cruise brand to serve the China market with a homeported ship in 2006 – everything about Costa Venezia is designed with the Chinese consumers’ preference in mind. The brand’s first ship built specifically for the China market, Costa Venezia will deliver Costa’s authentic Italian experience tailored to its Chinese guests’ travel, leisure and entertainment preferences. Guests will also be able to savor fine Italian dining, luxury Italian shopping and world-class Italian entertainment, while enjoying familiar comforts such as a range of Chinese cuisines and Chinese-style karaoke bars.

From its grand atrium modeled on Piazza San Marco to original ‘gondolas’ made by local artisans and masked parties recreating the famous Carnival of Venice, Costa Venezia will bring the passion of Venetian culture to the Far East when it arrives at its Shanghai homeport. The 135,500-ton, 5,260-passenger Costa Venezia will be Costa Cruises’ largest ship operating homeport cruises from China, and will be dedicated to Chinese guests beginning May 2019, offering them an Italian twist on cruise itineraries throughout East Asia.

European and North American guests will be welcomed onboard for the scheduled March 3, 2019, vernissage cruise from Trieste, Italy, to Greece and Croatia, followed on March 8 by a 53-day inaugural cruise, with Costa Venezia setting sail along the route once explored by Marco Polo, making its way through the Mediterranean, the Middle East, Southeast and East Asia before arriving in Shanghai.

Costa Smeralda from Costa Cruises – Expected Launch Date in October 2019
With a name that honors the spectacular Emerald Coast of Sardinia, the stunning features of Costa Smeralda will reflect the best of Italy, delighting guests with a unique travel experience evoking the style, hospitality and warmth of the “bel paese” (the beautiful country). The ship will be Costa Cruises’ first that is able to be powered in port and at sea by LNG, the world’s cleanest burning fossil fuel.

The heart of the new flagship will be a centrally-located, three-level domed Colosseo, lined with themed lounge bars, that will feature the best shows each evening. Day or night guests will be drawn to enjoy their morning coffee and evening Campari while admiring the sea through the large glass walls.

The new Costa Cruises flagship will host another unique feature at sea: an onboard museum. The Costa Design Museum – or CoDe – will be dedicated to the excellence of Italian design, showcasing many of the Italian designers and design firms that contributed to the ship’s construction and authentic “Made in Italy” décor.

Costa Smeralda guests will have access to 11 restaurants, four swimming pools, a water park with colorful waterslides, a multi-sport gym, disco, jazz club, games room, special areas set aside for kids and a luxurious spa featuring a beauty salon, hammam, thalassotherapy pool, 16 treatment rooms, and snow, salt and relaxation rooms. At 182,700 tons, and with over 2,600 guest rooms, Costa Smeralda will be the largest ship in Costa Cruises’ fleet.

The ship is scheduled to make its maiden voyage on October 20, 2019, with a 15-day cruise from Hamburg, with stops in Rotterdam, Lisbon, Barcelona, and Marseille before arriving for a dazzling naming celebration at Savona, in northwest Italy, on November 3.

AIDA Cruises today announced it will offer new cruises in Greece from May 23, 2021, with 7-day cruises departing from Corfu and traveling through the Greek islands to Crete and Rhodes, as well as to Katakolon (Olympia)...