Holland America Line’s Nieuw Statendam will officially join the fleet in 30 days on Dec. 1, 2018. The countdown is on until the ship’s delivery from Fincantieri’s Marghera shipyard in Italy, and Holland America Line celebrates the month-out milestone with 30 fun facts about the newest Pinnacle Class ship: 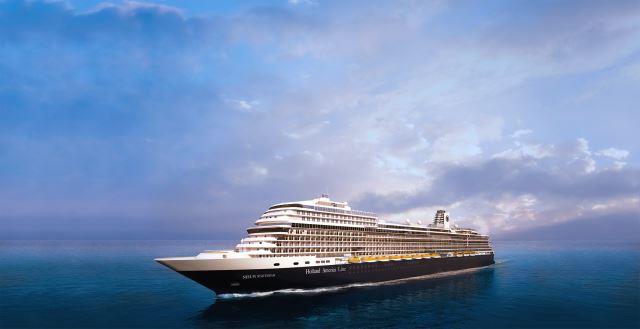 1.        Nieuw Statendam will visit more than 75 ports during her first year in service.

5.        Twelve Seattle-based businesses are key partners in the building, launch and operation of Nieuw Statendam, which is important to Holland America Line as Seattle’s hometown cruise line.

6.        Artists from 150 different countries are represented in Nieuw Statendam‘s artwork.

7.        More than 150 bottles of red wine will be made each month at BLEND, the first purpose-built wine blending venue at sea.

10.     Two hundred pounds of pasta will be prepared at Canaletto during a seven-day cruise.

11.     It would take 7,067 standard bottles of Champagne to fill Nieuw Statendam‘s Lido Pool.

17.     In Lido Market on a weeklong cruise, 5,600 freshly made, personalized salads will be prepared at Wild Harvest.

20.     More than 9,360 songs will be performed in Rolling Stone Rock Room during the first year.

23.     Nearly 20,000 guests will attend a Digital Workshop powered by Windows class in the first year.

25.     Seventy performers will grace the stages of Music Walk during the first year.

26.     Eighteen different flavors of gelato will be made on board each cruise.

29.     New York Deli & Pizza will serve up 350 breakfast sandwiches on a weeklong cruise.

30.     Nieuw Statendam is a sister-ship to Koningsdam, which was delivered in April 2016. A third Pinnacle-class ship will be delivered in 2021.

Nieuw Statendam sets sail on its 14-day Premier Voyage from Civitavecchia (Rome), Italy, to Fort Lauderdale, Florida, Dec. 5, 2018. The ship then spends a season in the Caribbean before returning to Europe for summer explorations to the Mediterranean and Norway.