A Dutch Treat in Business and Leisure

An aerial view of Amsterdam shows off an ultra-modern complex with curved structures and mirror-like walls. At a stone throw from the busy Sloterdijk rail line, a lifestyle hub has been developed on a site of a former office building, the KPN business complex in Sloterdijk. 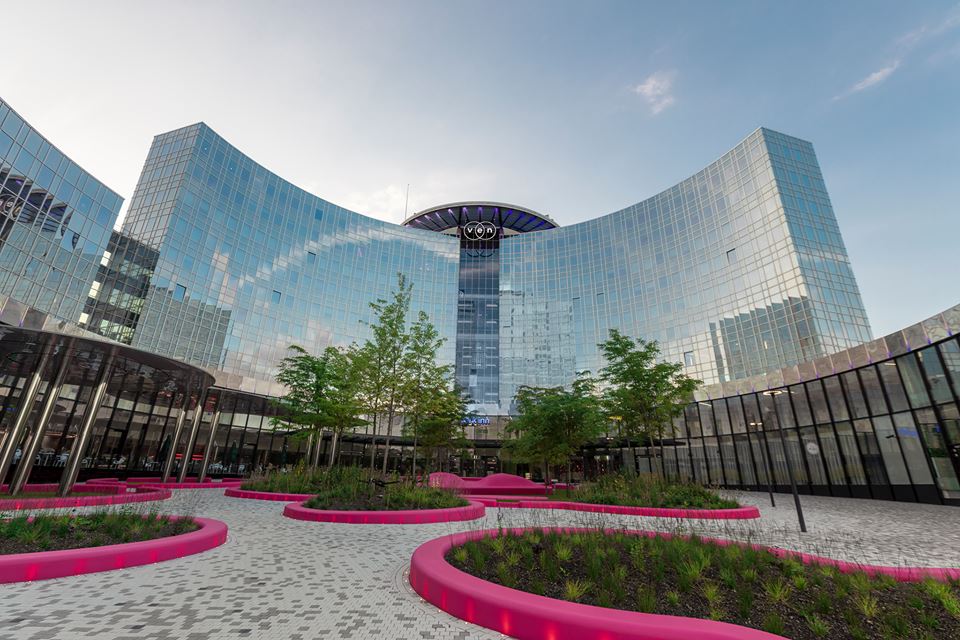 Ven Amsterdam is officially open. The building is home for Park Inn by Radisson Amsterdam City West hotel with 476 room, Holland Casino West and B-apart hotels. In addition, several catering concepts such as Burgers’n Sweets and Dutch Dagelijks Lekker, translated would mean Daily Delicious. A spa concept can also be found here like House of Wellness and FloatCenter Amsterdam. The one that complements the entire facility is Go! Rent a Car Amsterdam.

The Omnam Investment Group has added the international designer Karim Rashid to the project. Rashid has a reputation of a true visionary and the futuristic design of the complex is a no surprise. This has resulted in an impressive location where business, food, sleep, entertainment, and relaxation come together in a unique way.

Ven Amsterdam is the location of the former KPN head office. The building offers a unique mix of business and leisure which gives colour and life to Amsterdams Sloterdijk and its surroundings. David Zisser, the founder and CEO of Omnam Investment Group said that the realisation of this project is a milestone for Omnam. With the help of Karim Rashid, Ven Amsterdam is the perfect example of vision and expertise coming together, by transforming the medium-sized building into a large-scale project for multiple uses. Their ambition was to transform an enormous building, which has been empty for years, into a colourful all-in-one complex. They believe that they have been able to fulfil their promise towards the area of Sloterdijk into giving it a social and economic boost with this project.

The complex is the place for “stay and play” and is only a few minutes away from the Amsterdam City Center and about 10 minutes away from Schiphol. The Park Inn by Radisson, which is inside Ven Amsterdam, has a meeting academy, a conference centre with space for more than 750 guests and 19 rooms are for brainstorming, a cinema and a network of desk rooms. The guests from hotel or B-apart hotels can enjoy one of the 7 restaurants, relax at the spa either at House of Wellness or FloatCenter Amsterdam or enjoy their time at Holland Casino.

Ven Amsterdam has international cuisine with local ingredients coming together. With the 7 restaurants, the culinary possibilities at Ven are as colourful just as the interior of the building itself. The Holland Casino has a Global Dining as well and guests can enjoy a culinary journey from South America, Asia and the Mediterranean. In addition, other restaurants Burgers’n Sweets, Dagelijks Lekker (Daily Delicious), House of Poke, La Guardia and The Den and Tabu sky bar all can offer the food that touches the heart.

The collaboration with the internationally acclaimed designer Karim Rashid has resulted in an impressive combination of colours, such as pink fuchsia with lavender blue and mint green. Karim Rashid was inspired by the curved architecture of the building and the canals of Amsterdam, which made him add curved lines in his design. The interior of the building is characterized by soft, round shapes. The design is flowing from the interior hallways to the shower walls of the hotel rooms. The heart of the complex, The Piazza, Karim’s ode of curves and favourite colour fuchsia is present. It is an interesting observation that the casino’s colours also seem colourful. They are not the colours Karim used, but the colours are so similar to the colours used in online casino websites, like Gaminator. The colour of blue, yellow and grey seem very prominent in the casino.

Holland Casino is the latest partner of the Ven Amsterdam building. This gambling venue is the second venue of the Holland casino located in Amsterdam. The Holland Casino CEO Erwin van Lambaart said that the casino will be easily accessed by both residents and guests of the city.

Besides the traditional casino games offering, the facility also features live shows and other entertainment options. Erwin van Lambaart mentioned that he is proud, that after 12 years he could open a new casino where guests can experience a nice evening. The casino offers 503 slot machines, 12 gaming tables, a modern version of bingo that can be played on tablets, and a remote roulette.