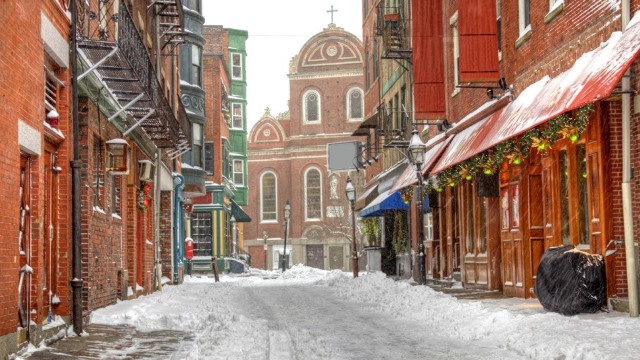 Six urban Four Seasons hotels have partnered together to offer guests an unforgettable holiday season. With the Holiday Getaway – Stay Longer package, guests can enjoy a complimentary third night to take advantage of even more festive events or extra rest and relaxation in some of America’s greatest cities.

Leave it to Charm City to put visitors and locals alike in the holiday spirit during the happiest season of the year. Explore Kennedy Krieger Institute’s Festival of Trees, which is now the largest holiday event of its kind on the East Coast, the German Christmas Village at West Shore Park and the PANDORA Ice Rink at Baltimore’s Inner Harbor. Head over to Hampden’s 34th Street, also known as “Miracle on 34th Street,” which features enthusiastically decorated homes that have been recognised by Nightline, the Travel Channel, and more. Take an evening stroll around the Harbor East neighbourhood, home to Four Seasons Hotel Baltimore, for holiday shopping and activities including Pet Photos with Santa. Gather the family and climb aboard The Polar Express at the B&O Railroad Museum, or watch the magical Rudolph the Red-Nosed Reindeer 4D Immersion Film at the National Aquarium. When it’s time to head back inside, get cosy at Wit & Wisdom and enjoy tastes of the holidays from the award-winning culinary team. Indulge in their popular Christmas Day Brunch or ring in the New Year and take the elevator home to start the year off right with breakfast in bed and beautiful views of Baltimore’s historic harbor.

Enjoy a quintessential New England holiday escape with Four Seasons Hotel Boston. From the magical tree lighting on the Boston Common to an evening at the Boston Opera House to enjoying Boston Ballet’s Nutcracker, Boston has no shortage of festive offerings this season. The Hotel’s youngest guests can delight in the Hotel’s popular Teddy Bear Tea, daily in the month of December, and travellers of all ages can enjoy ice-skating on the Boston Commons’ Frog Pond or checking out ski trails just one hour outside of Boston. To see true Boston sports fans, check out a Celtics or Bruins game at TD Garden, or simply cosy up with loved ones in the Hotel’s newly renovated guest rooms.

Descend upon the “City by the Lake” for a wide array of holiday activities to inspire cheer. Located in a 66-story iconic tower along the city’s famed Magnificent Mile, Four Seasons Hotel Chicago is the ideal launching pad for the best holiday shopping. Conveniently located one floor below the Hotel is the six-storey 900 North Michigan Shops, a collection of 70 luxury stores. Ice-skating at Millennium Park or Maggie Daley Park is a must-do for visitors of all ages, followed by a cup of cider or seasonal cocktail next to the fireplace at Allium Restaurant and Bar. Take advantage of nearby world class theatre, such as A Christmas Carol or catch the Broadway sensation Hamilton. Spend the late afternoon at Lincoln Park Zoo’s annual ZooLights that features one-of-a-kind luminous displays and holiday activities, return for a relaxing and festive Arctic Berry Facial in The Spa.

Come and experience the “new” New York for a taste of pure holiday magic. Celebrate at the annual Seaport District Tree Lighting Ceremony, complete with musical performances, themed delicacies, signature window displays and the official opening of the seasonal Seaport holiday market. This year also marks the first year of the Rooftop Skating Rink on the roof of Pier 17. And of course, no winter season is ever complete without an ice skating excursion, so be sure to visit The Rink at Brookfield Place, overlooking the city’s serene North Cove Marina waterfront. Following a day of skating, guests will find themselves ready for holiday retail therapy at Brookfield Place’s luxury stores and the Holiday Market at Westfield World Trade Center in the Santiago Calatrava-designed Oculus. When it’s time to head back inside, warm up with a swim in the Hotel’s indoor heated lap pool or get cosy at CUT by Wolfgang Puck surrounded by good friends and family, specialty holiday cocktails and warm dark chocolate soufflés on repeat.

Located along the banks of the Mississippi River, the historic “Gateway to the West” will be twinkling with delight this holiday season. Four Seasons Hotel St. Louis provides the perfect home-base to experience Winterfest at the Arch and enjoy ice skating in Kiener plaza, complete with festive cocktails and live music. Stroll through the nation’s oldest botanical garden for Garden Glow at Missouri Botanical Garden as walkways transform into a display of visual magic with more than one million dazzling lights. Pajama-clad families can board The Polar Express Train Ride while reliving the magic of the iconic children’s book and receiving a special gift from Santa. Stay nourished with festive bites from James Beard Award winning Chef Gerard Craft’s latest dining concept Cinder House, located on the eighth floor of the Hotel. Visit the spa to indulge the senses and relax the body with hydrating seasonal treatments that will prepare skin for cooler temperatures and festive days ahead.

Welcoming winter’s chill, Four Seasons Hotel Washington, DC will transform into a Hotel on Ice this season, inviting guests to experience a veritable urban wonderland. This begins with the Hotel’s exterior, where glowing modern art installations (part of Georgetown GLOW) will act as glistening beacons welcoming visitors to the city’s most charming neighbourhood. The cool transformation continues inside with Light Up the Season, a lobby event showcasing festive decorations fashioned by the city’s top local designers, all for a wonderful cause (proceeds benefit the Children’s National Health System). At BOURBON STEAK, the restaurant’s patio will become “Bourbon on Ice,” a dining sensation featuring three heated ice domes, each with their own cosy-chic theme. Or, sip irresistible iced wines at ENO Wine Bar’s “Iced ENO.” At the Forbes 4-Star “Iced Spa,” icy facials and body treatments will deliver visible results including smoother skin and reduced inflammation. And festive season in the nation’s capital isn’t complete without a visit to see the National Christmas Tree or a skate on Washington Harbor, both a short walk away.