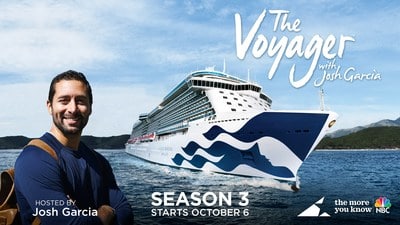 New episodes of Carnival Corporation’s Ocean Original TV programs “Ocean Treks™ with Jeff Corwin,” “Vacation CreationTM with Tommy Davidson and Andrea Feczko,” and “The Voyager™ with Josh Garcia“ begin Saturday, October 6, and will again air on Saturdays through fall 2019 on ABC and NBC.

Back for a third season on ABC stations is “Ocean Treks with Jeff Corwin.” It broadcasts nationally as part of the daytime Emmy-winning “Weekend Adventure,” a three-hour programming block airing Saturday mornings on 98 percent of the country’s ABC affiliate stations. In season three, Corwin takes audiences to Sri Lanka, Tanzania, Madagascar, the Seychelles, the Canary Islands and Mumbai, India.

Carnival Corporation’s original series – which debuted in fall 2016 and are distributed by Litton Entertainment – have been honored with two Daytime Emmy nominations and 24 Telly Awards, which recognize the best in TV and cable, digital and streaming, as well as non-broadcast productions.

The original content is part of Carnival Corporation’s focus on producing and broadly distributing engaging and compelling experiential content. All three shows continue to be ranked as number one or number two in their time slot, and collectively reach an average of more than five million viewers every weekend. With cruise vacations growing 20 percent faster than land-based vacations and with more people than ever taking cruise vacations in 2018, the strong ratings are further evidence that Americans’ interest in cruise vacations is growing exponentially.

Season two of La Gran SorpresaTM – another series from Carnival Corporation that airs on Univision — begins in late 2018 with a holiday special and extends into “wave” season, when many consumers book cruise vacations. The one-hour program is hosted by award-winning television personality Poncho de Anda and showcases how the power of travel reunites families.