HRH The Duke of Cambridge Departs on His Mission #EndWildlifeCrime 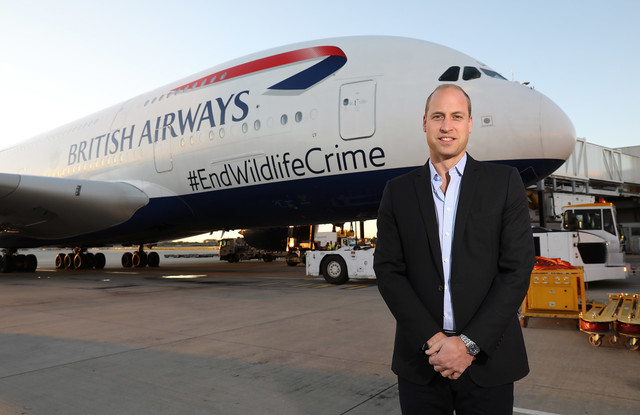 HRH The Duke of Cambridge departed from Heathrow this evening on a British Airways A380 aircraft displaying the message #EndWildlifeCrime, kicking off a mission to highlight the urgent global threat to wildlife and people from the illegal wildlife trade.

Prince William will be undertaking a working trip to Namibia, Tanzania and Kenya. There he will be visiting a range of projects and meeting with conservationists, communities and law enforcement representatives working to halt poaching and illegal wildlife trade.

Speaking recently at an event at the Royal African Society, The Duke of Cambridge said:

“Like so many others, I am deeply saddened by the numbers of elephant, rhino and pangolin who have been illegally slaughtered for their tusks, horns and scales. But the illegal wildlife trade also has a devastating human impact.

“Too many brave rangers are tragically killed each year by poachers. Communities see their tourist livelihoods threatened. And the proceeds of the illegal wildlife trade fund broader criminal networks and threaten security.

“This is why I am committed to doing what I can to help end this terrible, global crime. This will be a particular focus of my upcoming visit to Africa, and of course the conference on the illegal wildlife trade taking place here in London in October.”

The party is being flown by British Airways, a longstanding supporter of Tusk and a member of The Duke’s United for Wildlife Transport Taskforce.

Illegal wildlife trade is estimated to be the fourth most lucrative international crime after drugs, arms and human trafficking. Worth as much as £17 billion per year, the trade not only threatens some of the world’s most iconic species but also damages sustainable economic growth and the livelihoods of vulnerable people in rural communities.

Products from elephant, rhino, pangolin and tiger are amongst the most highly valued products traded, and are often trafficked via established international transport networks. Criminals also use networks of corrupt officials and agencies to undermine sustainable development and the law, damaging the livelihoods and growth of local communities.