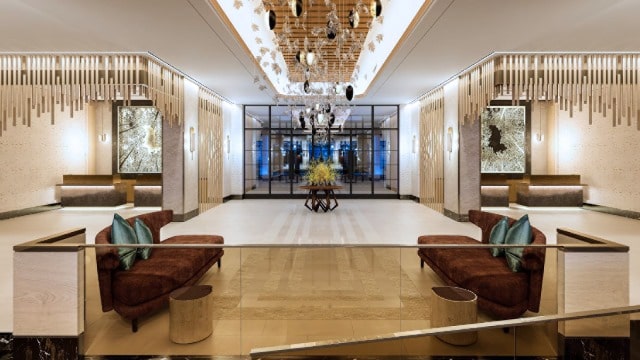 The three-year multimillion-dollar revitalisation of Four Seasons Hotel Austin is on track for completion this month, complete with a new nature-inspired lobby, lakeside restaurant and tree-top lounge.

Meant to evoke the feel of one of Austin’s luxe lakehouses, the design for the new spaces borrows heavily from the colours, textures and patterns found in the verdant gardens, towering oaks and shimmering waters in the Hotel’s resort-like backyard.

Complementing those vistas is an elegant chandelier made of blown-glass oak leaves and acorns, which imparts dramatic effect as soon as visitors step inside the Hotel’s steel-and-glass entry doors. On either side, peekaboo floor-to-ceiling sculptural wood slats – reminiscent of a stand of trees – allow a glimpse of the relocated concierge and reception desks, above which two monumental art panels depict the ever-changing silhouettes of oak tree canopies. According to Dalton, the works are made by Texas sculptor Brad Oldham using laser-cut steel, bronze powder and back lighting, providing “surface texture and depth but also a subtle reference to what lies behind you.”

Dalton’s nod to nature is also visible in Live Oak, formerly known as the Lobby Lounge. Considered the heart of the Hotel, both literally and figuratively, the space features a central bar with a streamlined profile that accentuates the views, as well as a new deck that’s destined to become one of Austin’s top patios.

Though the palette is consistent throughout, Live Oak’s different elevations project distinct personalities. For example, alcoves with fireplaces and built-in televisions in the upper area provide comfortable spots for lounging, while a multi-tiered central bar – flanked by illuminated bookcases, Dalton’s version of “liquor becomes art” – gives the lower level a dynamic energy.

Replacing TRIO, the Hotel’s steakhouse since 2007, Ciclo (Spanish for “cycle”) pays homage to the ever-changing seasons and their effect on nature, including the abundance of trees, plants and flowers just beyond the restaurant’s doors.

With these as his muse, Dalton set out to design a space that would be equally as captivating. Mid-century modern forms and influences can be found throughout, from herringbone natural oak flooring and wood columns to four wall-to-wall hand-painted murals that represent each of the seasons.

Seating ranges from channelled leather banquettes in a warm cognac hue to brass-banded tables with tops that alternate between rich rosewood and conifer green.

Like its upstairs counterpart, Ciclo will capitalise on its picturesque setting with wide floor-to-ceiling windows and doors, some of which will open to the restaurant’s newly expanded terrace. As a restaurant inspired by nature, it’s fitting that Ciclo has more outdoor seats than indoor – 112 and 90 respectively – a rarity in Austin.