With Celebrity Edge less than three months from its first official sailing, Celebrity Cruises completes the final chapter of the ship’s transformational design story, with the reveal of iconic spaces designed by renowned designers, Patrick Jouin and Sanjit Manku of Jouin Manku Studio. This includes the stunning space that will become the beating heart of the year’s most anticipated new ship, The Grand Plaza, yet another venue designed to break from traditional cruise ship thinking and shatter all expectations. 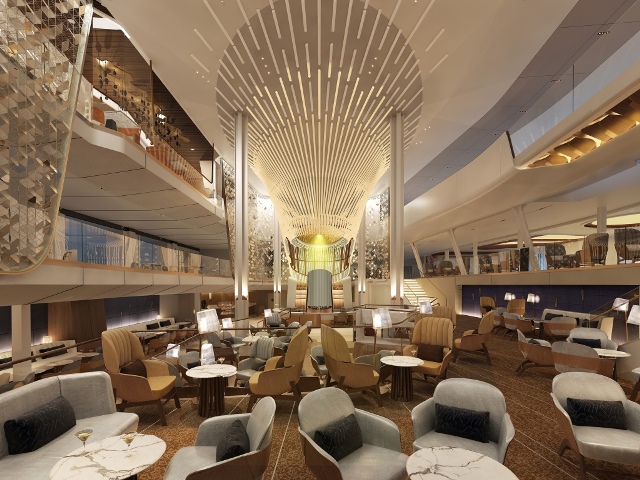 Celebrity Edge marks a turning point in the future of ship design. Designed in 3-D, Celebrity Edge nears completion at the Chantiers de l’Atlantique shipyard in Saint Nazaire, France and they revealed the iconic space, The Grand Plaza, designed by Paris-based Patrick Jouin and Sanjit Manku of Jouin Manku Studio. The ship is poised to transform the way modern travelers experience the world. Take a sneak peek at the world’s most anticipated new ship!

THE HEART AND SOUL BEHIND THE HEART AND SOUL OF CELEBRITY EDGEWith the aspiration to completely transform the way guests connect to the world, Celebrity sought creative thinkers who were new to the cruise industry to ensure every aspect of Celebrity Edge would be a departure from traditional thinking about cruising.

Among those chosen were the Paris-based design duo of Jouin Manku, who are celebrated for drawing inspiration from a multitude of cultures and for merging cutting-edge technology with old-world craftsmanship. They are credited with world-famous works such as the Alain Ducasse au Plaza Athénée and the Jules Verne restaurant in the Eiffel Tower. Together, the visionaries collaborated with the Celebrity team to bring these new concepts to life.

Jouin’s connection to the Chantiers de l’Atlantique shipyard was also found to be far rooted beyond his work on Celebrity Edge, noting: “The shipyard is very important for me and my family: My grandfather worked at this very yard, and when he passed away at a young age, they hired my grandmother so she could continue to support her family. This project was a very emotional one for me. Sanjit and I channeled that into our design, which inspired our unique approach in showing the craftmanship.”