Boeing and Air Peace of Nigeria today announced a new order for ten 737 MAX 8 airplanes during a signing ceremony in Lagos. 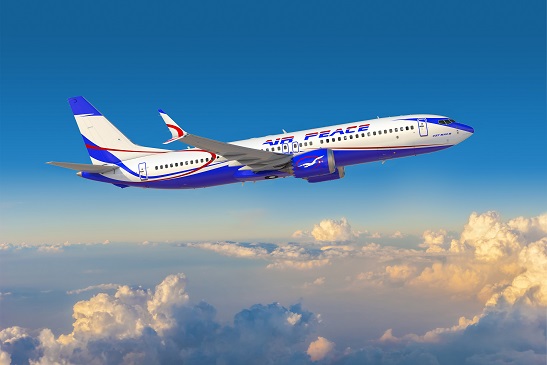 Air Peace already operates Boeing 737s between major cities in Central and West Africa. The airline, which recently added Boeing 777s to its fleet, is looking to soon launch its international flight operations.

The 737 MAX 8 is part of a family of airplanes that offer 130 to 230 seats and the ability to fly up to 3,850 nautical miles (7,130 kilometers). With improvements such as the CFM International LEAP-1B engine and Advanced Technology winglets, the 737 MAX will help Air Peace save more than 20 percent on fuel costs compared to its current single-aisle airplanes.

The MAX 8, in particular, offers airlines 13 more seats than its closest competitor, seven percent lower costs for each of those seats, and 300 miles more range. The operating advantages, along with the popular Boeing Sky Interior, explain why carriers have been choosing to fly the MAX in Africa.

“Africa is a growing market for commercial airplanes and we are proud that airlines like Air Peace are selecting Boeing aircraft to be part of that growth,” said Ihssane Mounir, senior vice president of Commercial Sales & Marketing for The Boeing Company. “This order reflects the strong demand that we are seeing for the 737 MAX as airlines choose the airplane’s superior performance and reliability.”

The 737 MAX is the fastest-selling airplane in Boeing history, accumulating more than 4,700 orders from 102 customers worldwide.