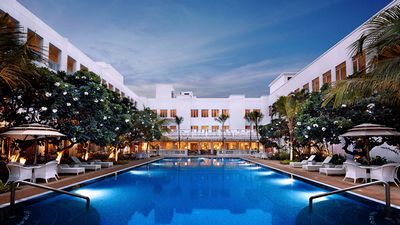 Taj Connemara, South India’s oldest hotel reopens today after undergoing a year-long extensive renovation and redesign. Dating back to 1854 hotel’s legendary history has been brought to life with fresh and modern sensibilities. Over a century old, the Taj Connemara is a proud relic of the colonial era and is named after Lord Connemara, the then Governor of Madras.

Restoration of a design icon
Taj Connemara’s refreshed design has eclectic architectural influences of classic colonial, art deco and distinctive elements from the celebrated architect Geoffrey Bawa’s ‘tropical modernism’ style, coupled with a timeless refreshing interior design. The hotel’s 147 rooms and suites spread across the Tower and Heritage wings are each appointed with elegant four poster beds, vintage prints and objets d’art. Sensitive preservation of the art deco façade and interiors will showcase the hotel’s original features, including wooden carvings sourced from the 16th and 17th century temples of Mahabalipuram. Unique for a city hotel, guests will enjoy 4.5 acres of landscaped greens and enclosed atrium gardens.

Food and beverage
Restaurants and bars at the Taj Connemara shall prove to be attractions in their own right for Chennaites and hotel guests alike. Informal and formal dining choices convey a 19th century club-like feel. The Lady Connemara Bar & Lounge — the city’s first licensed bar — reclaims its position as the place to be seen at. Novel culinary experiences showcase nostalgic Anglo-Indian dishes and regional Madras specialties in a relaxed ambience at the all-day-diner Verandah, while the quintessentially Chennai experience Raintree continues to serve authentic Chettinad fare in an alfresco setting.

Chennai – gateway to South India
Located on the Coromandel Coast off the Bay of Bengal, Chennai, formerly known as Madras, is the capital of Tamil Nadu. Recently declared as a creative city by UNESCO, Chennai is enjoying its place in the spotlight for its many strengths including its cuisine, architecture, culture and musical heritage. The hotel’s concierge team will curate exclusive experiences, including heritage tours retracing the city’s colonial past and opportunities to engage with the thriving performing arts scene, textile industry, the Mahabalipuram temple complex declared a UNESCO heritage site and the fragrant and flavourful Tamil street food.

The Hyatt Place to Open Hotel in Normandy, France