Celebrity Cruises continues to unveil more details about Celebrity Edge, their first new cruise ship in six years. With its transformational design, Celebrity Edge is poised to raise the bar on modern luxury travel to even greater heights, and the entertainment on board is just as game-changing as the ship itself. On Celebrity Edge, guests will experience the brand’s most technologically advanced main theatre, the most production shows of any ship in the brand’s history, the largest cast of world-class performers on any premium cruise ship, and more entertainment venues than ever before. 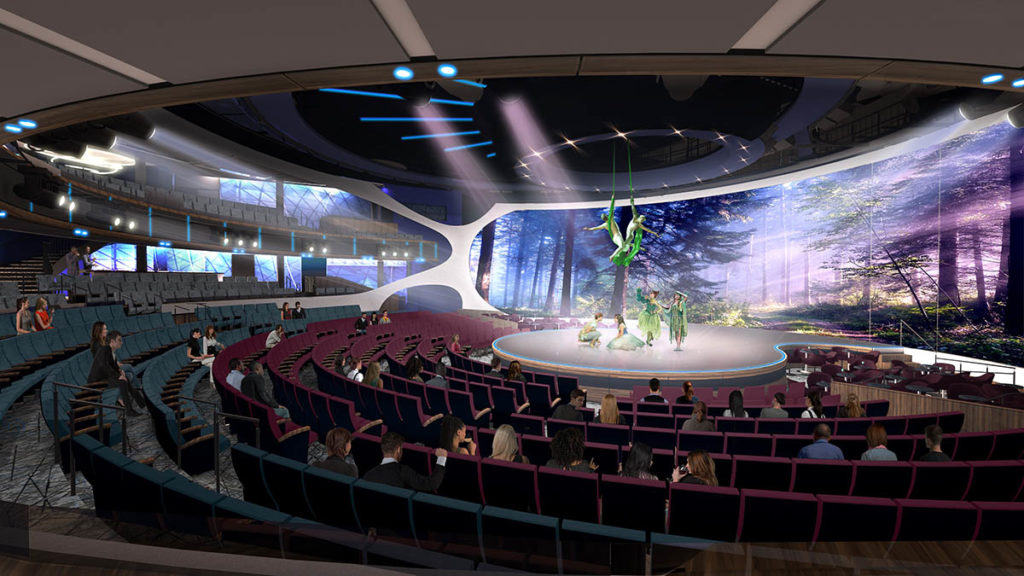 INTRODUCING THE THEATRE – A FEAT WORTHY OF A STANDING OVATION
The Theatre on Celebrity Edge throws away the curtain altogether, blurring the line between audience and performance and immersing guests in an entertainment experience like no other. With four stage areas and three gigantic, moving projection screens, The Theatre offers an ever-changing canvas for the productions.

The main stage extends into the audience creating a theatre-in-the-round. A duo-directional rotating platform rises almost seven feet above the stage to take performances to a whole new level. With two rotating spiral staircases, 10 synchronised panoramic projection screens, 16 state-of-the-art video mapping laser projectors, aerial performance rigging, and more, the technology behind the scenes will, at times, steal the show.

To make all of The Theatre’s technology run like clockwork, Celebrity Cruises has collaborated with TAIT, a leader in the stage automation business. The entire stage performs a precise synchronisation of rotating stage platforms, rain curtains, spiralling staircases, flying aerial rigs, and the tallest projection screens at sea. TAIT’s automation is coupled with the visions of the UK-based Black Skull Creative group, who’ve created contemporary shows and experiences around the world, including the 2012 London Olympics. Celebrity Cruises has also teamed up with Three In One Entertainment and Consulting, whose creative successes include INFERNO: The Fire Spectacular in Las Vegas.

At The Theatre, guests can enjoy five new full production shows, including the Shakespeare-inspired A Hot Summer Night’s Dream, where light-hearted theatre meets extraordinary acrobatics; The Jewelry Box, with its jaw-dropping technological feats; Kaleidoscope, a high-energy music and dance extravaganza harnessing the stage’s state-of-the-art technology; and two shows as part of Celebrity Cruises’ new Headline Residency program – Get Up, a dynamic pop concert produced by Black Skull Creative, and The Purpose, an uplifting production designed to celebrate the inner self.