Radisson Hospitality announces the signing of the Radisson Hotel & Suites, Gdańsk in Poland. In March 2018, the group announced its plan to rollout Radisson, the upscale hotel brand, across EMEA – and this is the first hotel to open in Central & Eastern Europe (CEE). The new Radisson will bring the group’s portfolio to 16 hotels (3,500+ rooms) in operation or under development in Poland. 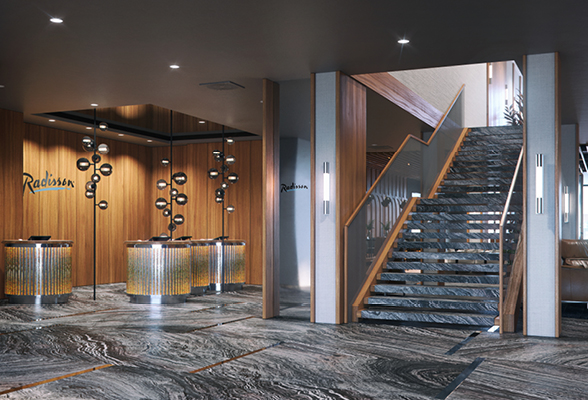 The upscale, full-service hotel will deliver Scandinavian-inspired hospitality and complement our Radisson Blu hotel in Gdańsk, ranked as the third most visited city in Poland based on airport arrivals, and a popular summer destination for leisure travelers, including families.

Gdańsk is an important industrial and economic center on the Baltic Coast in the north of Poland, and a vital part of the Tri-City metropolitan area – a region that generates a significant portion of the nation’s GDP and has seen a major rise in tourist arrivals in recent years. It’s also one of the most rapidly developing urban and business centers in the country, with a fast-growing MICE sector making the city a key location for business travelers.

The Radisson Hotel & Suites, Gdańsk will be centrally located on Granary Island and is part of the Deo Plaza project, a building complex that will feature a hotel, residential apartments and host a wide range of shops and restaurants.

Due to open in Q4 2018, the new-build hotel will feature 142 guestrooms and suites (including 12 junior suites, five suites and four apartments). A second phase, scheduled for opening in April 2019, will bring the hotel´s accommodation to 350 rooms and suites. The hotel will feature a range of leisure facilities, including a lobby bar, all-day dining restaurant, gym, spa and swimming pool. Meetings and events will also be well catered for, with 1,000sqm of space set across a ballroom, four function rooms, seven meeting rooms and a separate area that can be used as a foyer or a function space.

Located on the historic Granary Island in Gdańsk, the Radisson Hotel & Suites will enjoy a prime location in the city – ‘just a bridge’ away from the historic center and many other tourist attractions. Dlugi Targ, the main shopping and restaurant district in the city, is also only 100m away. The main train station is 1.5km from the hotel (providing connections to Warsaw and Krakow), while Gdańsk International Airport is 17km from the hotel.

Emirates Adds Frequencies to the Netherlands