The historic Al Alamein Hotel in Egypt has officially reopened after a major facelift by Emaar Hospitality Group that makes it amongst the finest resorts along the Mediterranean. The opening event was attended by Egyptian Minister of Tourism H.E. Dr.  Rania Al-Mashat and prominent personalities. 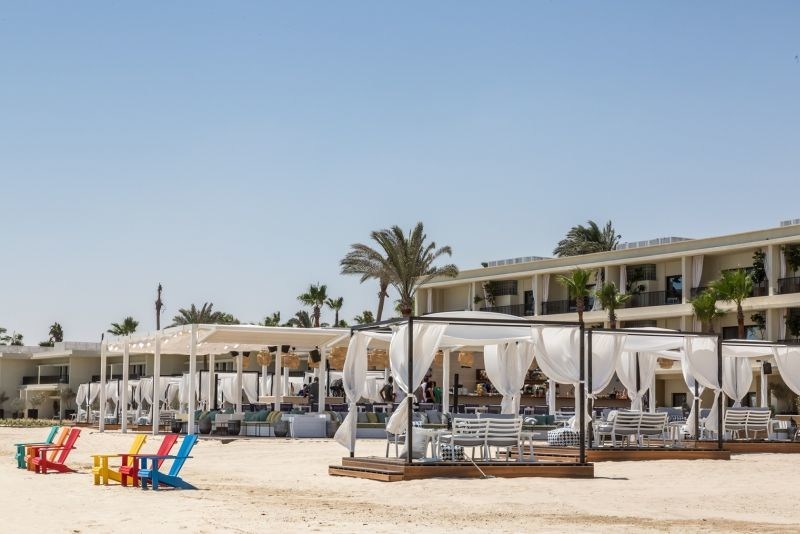 Situated in the picturesque setting of Sidi Abdel Rahman Bay, the hotel’s glamorous design ethos and refurbished retro-modern interiors hark back to the glory days of the 1960s, when the resort first opened. The remodelled designs blend vintage charm with contemporary style, evoking a sense of nostalgia of the golden age of Egyptian music and cinema.

While the building stays true to its heritage, visitors can expect modern comfort, from the restaurants to the corridors and rooms. An assortment of black and white photographs of Egypt’s celebrated classical actors and singers festoon the columns in the lobby.

There is also the renowned Umbrellas sculpture by Greek artist George Zongolopoulos, a poetic structure of steel umbrellas that stretches 13 metres into the sky, offering a dramatic reinterpretation of Abdel Halim Hafez‘ classic ‘Dokko Elshamasy’ or ‘Fix the Umbrellas on the Beach’. One of the most photographed modern sculptures worldwide, it was first displayed at the Venice Biennale in 1995, drawing international attention, and will now delight visitors to this Egyptian vacation spot.

The hotel has a magnificent collection of art by local and global artists, including an iconic mosaic mural of late legendary Egyptian singer Om Kolthoum and another one featuring colourful ancient boats.

Al Alamein Hotel is part of a thriving residential and tourist community Emaar is developing in Marassi, the company’s flagship Mediterranean landmark in Egypt. Emaar has launched Vida Marassi Marina, Address Marassi Beach Resort and Address Marassi Golf Resort + Spa in Marassi, which will have seven luxury hotels with 3,000 rooms.