This summer, Rotunda at Four Seasons Hotel London at Ten Trinity Square unveils its new Heritage Afternoon Tea, based on the iconic building’s history. As the headquarters of the Port of London Authority, Ten Trinity Square was once at the heart of global trade and the gateway for the tea routes to enter London. Rotunda’s Heritage Afternoon Tea will celebrate the building’s past and the connections between east and west. 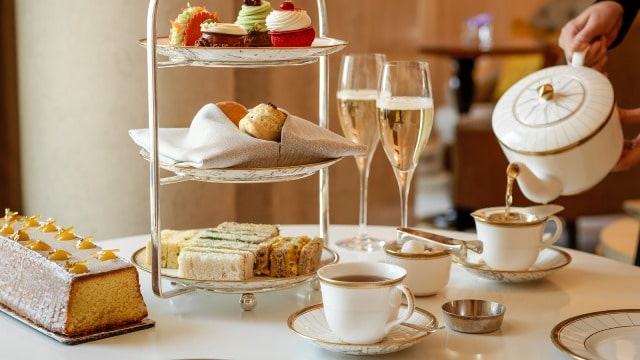 Mapping those historic trading routes, Rotunda’s Afternoon Tea will include brews from the foothills of the Himalayas with the finest darjeeling from Makaibari to Earl Greys from Satemwa Estate in the highlands of Malawi. A selection of Chinese teas will include a rare oolong from Anxi and white jasmine and peony teas from the coastal Fujian province, which embarked on the journey to London via the East China Sea. Closer to home, herbal teas grown in Cornwall will balance the international offering, while Champagnes will include Delamotte Brut, Charles Heidsieck and AR Lenoble Rosé available by the glass.

The handcrafted bone china tea service, designed by prominent British designer Richard Brendon, reflects the neoclassical architecture of the building. The intricate design denotes the routes travelled by the globetrotting tea merchants with a nautical compass and a detailed map of the shipping routes from China to Britain. Laden with traditional finger sandwiches created by Rotunda’s new Executive Chef David Greenhill, the tea stands will celebrate British classics including egg mayonnaise with truffle oil; coronation chicken, and the classic minted cucumber. Alongside the sandwiches there will be seasonal pastries such as strawberry and sansho, apricot and verbena in an almond sponge, and passion fruit ganache atop chocolate sablé and chocolate mousse – not forgetting the essential homemade scones with seasonal jams and Devonshire clotted cream.

“Afternoon tea is such a staple of British culture, so we wanted to honour that with a traditional menu, but one that reflects the heritage of our home. We’re incredibly fortunate to be housed within such an impressive and inspiring building as Ten Trinity Square and we’ve drawn heavily on the building’s trade links to highlight age-old tea routes that still fuel Britain’s love of afternoon tea today,” says Executive Chef David Greenhill.

Rotunda’s new Heritage Afternoon Tea is available all week between 2:00 and 5:00 pm.