The 7 Most Common Expat Types and Why They Move Abroad

Although every expat journey is unique, there are similarities when it comes to their motivation for moving and their lifestyle abroad. Based on the insights of more than 18,000 expats living in 187 countries and territories in the annual Expat Insider survey, InterNations, the world’s largest community for people who live and work abroad, presents the first comprehensive expat typology with the 7 most common expat types that roam the world. 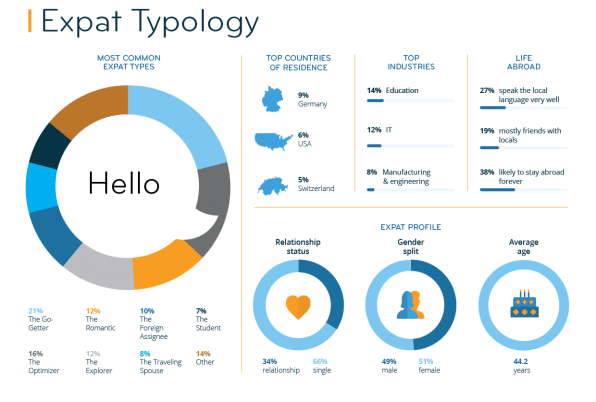 While the Go-Getter and the Foreign Assignee move abroad for work-related reasons and dedicate a lot of time to their job, Optimizers simply search for a better life abroad. They value a good work-life balance and find it easy to settle in. Settling down also seems to be easy for the Explorer, while Romantics find it easy to make local friends — the two types move abroad for an adventure and love, respectively. While the Traveling Spouse also moves abroad to be with their partner, they often struggle to feel at home abroad. Additionally, they often face poor career prospects, and many are likely to return home at some point. Lastly, Students are highly educated and move abroad for school or university. They are also the most likely to speak the local language very well.

Go-Getters are highly educated expats who move abroad to boost their career: ten percent of Go-Getters hold a PhD, 45 percent graduated with a master’s degree, and 33 percent have a bachelor’s degree. In their new country of residence, they mainly work in education (16%, including language education), IT (12%), and manufacturing & engineering (9%). “Working life in Germany is very satisfying, especially for engineers like myself, as there is an abundance of jobs and opportunities available,” says a Go-Getter from Singapore.

Spending 44.7 hours per week at full-time jobs, Go-Getters are slightly busier than the global average of expats (44.0 h). Nonetheless, 64 percent are satisfied with their working hours (vs. 62% globally) as well as with their career prospects (59% vs. 55% globally). “The job I have is very exciting in terms of the future, and the salary is very good,” reports a British Go-Getter living in Vietnam. In fact, close to three in five Go-Getters (59%) believe their salary abroad is higher than what they would make in a similar job back home (vs. 53% of all expats).

Putting work first might have an impact on their personal life: close to one-quarter of Go-Getters in a relationship (24%) are currently not living in the same country as their partner — this is the highest share among all expat types and twice the global average (12%). Moreover, more than two in five (41%) find it hard to make local friends abroad, compared to 36 percent globally. Maybe this is the reason why 25 percent do not feel at home abroad yet, and another 18 percent believe that they never will (vs. 22% and 15% globally).

Out of all expat types, Optimizers see the most potential benefits in moving abroad, and it seems like they were right: an above-average share of Optimizers is satisfied with the weather (74% vs. 61% globally) and the quality of environment (79% vs. 69% globally) in their host country. “I love the fresh air and sunshine. The country is so green and picturesque,” says a British expat living New Zealand. Additionally, close to nine in ten Optimizers (88%) feel safe abroad (vs. 82% globally), and 74 percent are satisfied with their financial situation (vs. 67% globally). “I can survive financially without giving up the nice things in life,” reports a Dutch Optimizer living in Italy.

When it comes to their working life, 81 percent of Optimizers work full time, which is slightly below the global average of expats (84%). Despite somewhat shorter full-time working hours (43.4 h vs. 44.0 h globally), close to three in five (58%) believe that their current income is higher than what they would get in a similar job back home (vs. 53% globally). “Life is easy here. I do not work much and make enough money to travel, save for the future, and afford all my expenses,” reports a US American expat living in China.

Optimizers do not seem to struggle much with settling in abroad, either: more than seven in ten (72%) feel at home in the local culture, which is the highest share among all expat types and twelve percentage points more than the global average (60%). Maybe this is due to the fact that Optimizers find the local residents generally friendly (77% vs. 69% worldwide) and think it is easy to make local friends (56% vs. 45% globally).

Although the Romantic moved abroad for love, their romantic relationship did not necessarily last: twelve percent of them are currently single. For those Romantics who are (still or again) in a relationship, things are going well: close to nine in ten (88%) are satisfied with their relationship, and for 57 percent things could not get any better. “My only reason for living here is my desire to be close to my partner,” states a Ukrainian expat living in Germany.

Romantics appear to really make an effort to adapt to their partner’s home country: close to three in five (57%) state to speak the local language fairly or even very well. “I have learned the language, culture, and how to get along with the people,” reports a Filipino living in India. In fact, the Romantic is most likely to be mainly friends with local residents (38%) out of all expat types, which is twice the global share of all expats (19%).

Explorers seem to find it easy to settle down in their new country of residence, with almost three-quarters (73%) feeling at home there (vs. 64% globally). Maybe this is due to the fact that the majority of Explorers (68%) finds it easy to make new friends abroad (vs. 57% globally), which is the highest share among all seven expat types. “Meeting people and having friends is very important for me,” a Canadian expat living in Germany shares.

Generally, Explorers perceive the local residents’ attitude towards them positively, and 75 percent are satisfied with this factor (vs. 66% globally). In addition to that, they have the highest share of respondents satisfied with their own socializing and leisure activities abroad (76%). “I just love Vienna. It is a beautiful city, relaxed, and with more than enough to do and see,” says a British expat who moved abroad looking for an adventure.

Aside from making friends, a good work-life balance seems to be important to the Explorer. Explorers with a full-time job spend just about 42.4 h per week at work (vs. 44.0 h globally). In fact, nearly seven in ten (68%) are happy with their work-life balance (vs. 61% globally), which is — along with the Optimizer — the highest share among all expat types.

Nearly every Foreign Assignee (96%) works full time (vs. 84% of all expats) and, with an average of 46.1 working hours per week, they spend by far the most time at work (vs. 44.0 h globally). However, this seems to pay off, as 26 percent report an annual gross household income of more than 150,000 USD, more than twice the global average (12%). Their generous household income might also be related to the fields they frequently work in: manufacturing & engineering (14%), finance (13%), and IT (11%).

More than three in five Foreign Assignees (61%) are satisfied with their career prospects (vs. 55% globally), and almost seven in ten (69%) are happy with their job security (vs. 59% globally). Both shares are the highest out of all expat types. “My job is a challenge, but I have many opportunities to grow as a professional,” states an expat from Peru living in Honduras. Maybe that is the reason why 73 percent of Foreign Assignees are generally satisfied with their job (vs. 65% globally).

Close to three in five Foreign Assignees (58%) think it is likely that they will return home at some point (vs. 43% globally), again the highest share out of all expat types. While this might be due to the fact that they were sent abroad by their employer for a limited time only, close to a quarter of Foreign Assignees (23%) also do not feel at home abroad yet, and another 17 percent do not think they ever will. “It is part of my job,” a Portuguese expat living in Mozambique explains. “I adapt in order to fulfill my work requirements.” Maybe they struggle with settling in because they miss their significant other: more than one in five Foreign Assignees who are in a relationship (22%) do currently not live in the same country as their partner — after the Go-Getter, this is the second-highest share out of all expat types.

While most other expat types have a fairly balanced gender ratio, close to nine in ten Traveling Spouses (86%) are female. “We only live here because of my husband’s work,” a Dutch expat living in Kosovo reports. Due to them moving for their partner’s sake, Traveling Spouses are more likely than other expat types to take care of their home and/or children (27% vs. 5% worldwide) or to be currently looking for work (17% vs. 8% globally). Employees (13%) only make up the third-largest share when it comes to Traveling Spouses’ employment status (vs. 25% globally). “I am worried about my future career because my husband is the one who has a job,” a Spanish expat living in the Netherlands explains. In fact, 41 percent are unsatisfied with their career prospects, compared to 25 percent globally.

In addition to frequently unsatisfying careers, Traveling Spouses also struggle with settling in abroad on a personal level. One-third (33%) does not feel at home in the local culture, nine percentage points more than the global average (24%). Moreover, 20 percent believe that they will never feel at home in their current country of residence, which is the highest share among the seven expat types. Almost one in three (32%) find it hard to make new friends abroad, and an even higher share has difficulty making local friends in particular (48%). Both results are above the global average (25% and 36%, respectively).

Despite being able to communicate easily — the share of Students speaking the local language of their respective host country very well is the highest among all expat types — Students struggle to make local friends abroad. More than two in five (41%) find this hard, compared to 36 percent globally. “It is not very easy to make new friends here in Germany,” a Chinese expat says. Maybe this contributes to the fact that just 54 percent of Students feel at home in the local culture, compared to 60 percent worldwide.

Less than half of the Students (46%) are in a committed relationship, which is far below the global average (66%) and the lowest share among all expat types — however, with an average age of 32.4 years, they are also by far the youngest expat type (vs. a global average of 44.2 years). Those who are in a relationship, though, are far more likely than other expat types to have met their significant other in their current country of residence (58% vs. 32% globally).

In addition to being highly educated — eleven percent of Students already hold a PhD, which is the highest share among the various expat types — they are also very likely to work in education themselves (14%). Other common fields of occupation include IT (13%) and manufacturing & engineering (9%). With 58 percent positive ratings, Students are quite satisfied with their career prospects, compared to 55 percent globally. “London is good for young people starting their careers and who are eager to network and learn,” explains a Slovakian Student. However, only 56 percent of Students are satisfied with their financial situation, which is far below the global average (67%).