This Independence Day, American Cruise Lines has its entire fleet of new small ships sailing America’s magnificent rivers, coastlines and waterways from “sea to shining sea!” All the line’s cruises over the 4th of July will host onboard celebrations and arrive in gorgeous port cities across the U.S. in time for local celebrations. 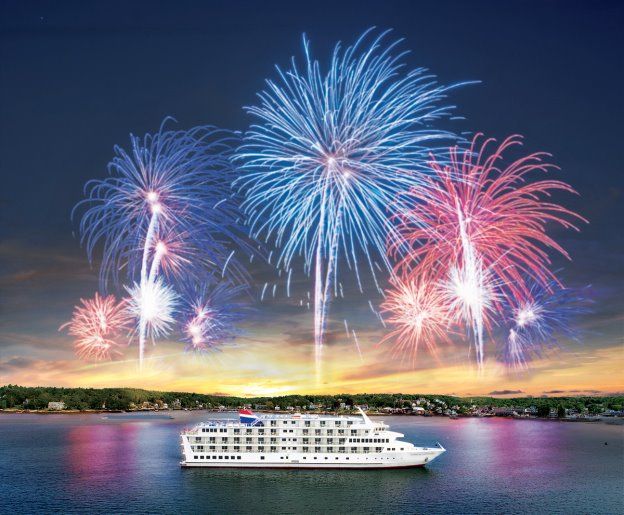 Coast to coast, American’s ships are well positioned across the nation. “American Constellation” will celebrate in Glacier Bay, Alaska. New 2018 ship, “American Constitution” will dock in Provincetown, MA for fireworks over the harbor and the “Queen of the Mississippi” will be in St. Louis for a gorgeous fireworks display over the iconic Gateway Arch. “America” will also be on the Mississippi River celebrating Louisiana-style in Baton Rouge. “American Pride” and “Queen of the West” will both be out west on the Columbia River-with “American Pride’s” guests at Mt. St. Helens and “Queen of the West’s” guests at The Dalles enjoying spectacular views of snow-capped Mt. Hood. In the East, “American Star” will be in historic Newport and “Independence” will be in Rockland, MEhosting a special Lobsterbake BBQ. Finally, “American Spirit” will dock in Port Angeles, WAwhere their 4th of July celebrations include an all-American apple pie baking contest and parade which ends at City Pier right in front of the ship. It doesn’t get any better this 4th of July than with American Cruise Lines.

In addition to all the fireworks displays and local celebrations on shore, all American’s cruises over the 4th will have festive shipboard BBQs and themed cocktail parties hosted on the top decks. Ships will be decorated in patriotic décor and guests will receive commemorative American flag pins. Ships will also have photo booths, equipt with patriotic dress-up hats so guests and new friends alike can have some extra fun together on board.

This Independence Day, American Cruise Lines’ ships offer the best seats in the house with incomparable views of spectacular coastlines and small ship access to the country’s most beautiful port towns. Guests will enjoy America’s patriotic splendor and all its inherent beauty as they cruise through the greatest nation on earth.