Leading Spanish holiday rental website, Spain-Holiday.com, has compiled a summer pending price comparison report that reveals the best value and most expensive destinations for Brits to take a break in Spain this year and the results might surprise you.

According to the annual Summer Spending Report, Gran Canaria is one of the cheapest destinations based on airport transfer by bus, taxi and car rental rates, as well as eating out, and family-friendly activities such as a day at a water park, or a theme park.

In contrast, the three most expensive destinations are the Mediterranean islands of Ibiza and Mallorca followed by the Costa Dorada. 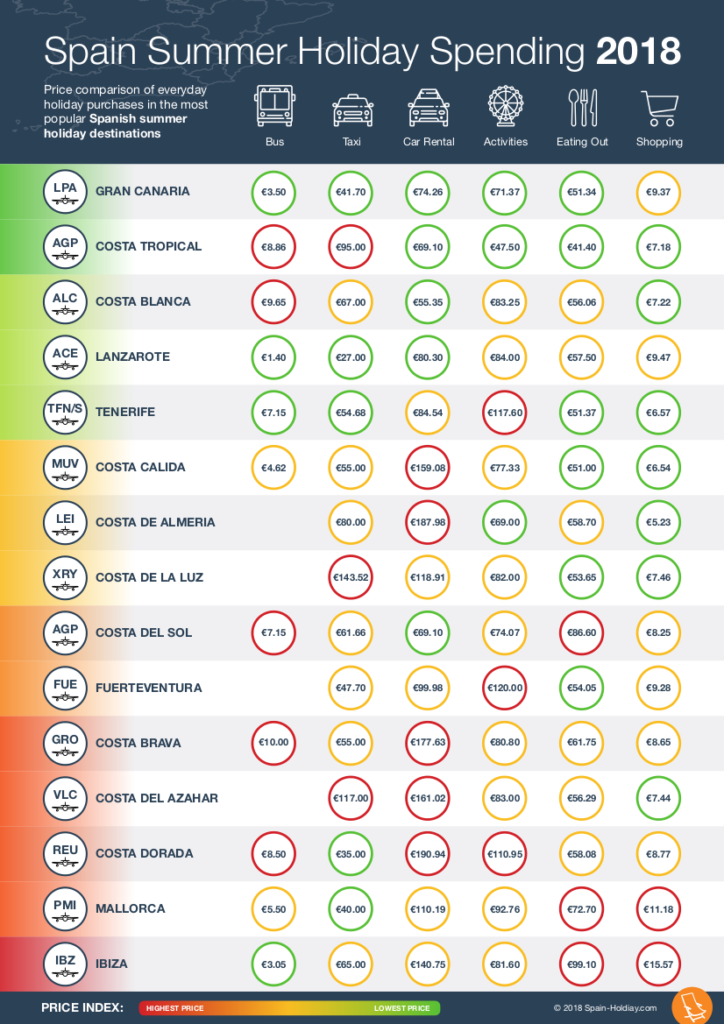 The data, compiled by the holiday rental website, Spain-Holiday.com, compares the price of everyday holiday expenses such as airport transfer by bus, taxi or renting a car, as well as typical family-friendly activities and eating out and food shopping.

Transport
For those staying in self-catering accommodation, one of the biggest, unavoidable expenses tends to be getting from the airport to the accommodation.

The cheapest way to get from the airport is normally by public transport which costs between €1.40-€10 for an adult single, compared to a taxi fare of between €27-€144.

Overall the Canary Islands of Gran Canaria, Lanzarote and Tenerife are ranked in the top five best value destinations with Lanzarote the cheapest for both bus and taxi airport transfer as well as being in the top five for overall value.

For those heading to the party island of Ibiza on a budget, money saving advice that could save you hundreds of euros includes taking the bus from the airport which stops at the various holiday hotspots such as San Antonio

Another surprising holiday budget tip includes comparing car hire prices to bus fares from the airport.  For example, a family of four holidaying on the Costa Blanca can hire a car for a week at Alicante airport for less than the price of the return bus tickets.

Eating out & Food Shopping
The study compared costs of items such as eating out and a basket of everyday staple supermarket purchases. A three-course meal for two people in a mid-range restaurant sharing a bottle of house wine and a bottle of water, including tax and service will set you back an average of €35.

Brits on a budget should head to the coastal resorts of Almuñecar, Motril, La Herradura or Salobreña on the rugged Costa Tropical. The relatively unspoilt Costa Tropical is in the top three best value summer holiday destinations in Spain, according to the Summer Spending Report 2018. Eating out and food shopping is 30% cheaper than average prices in popular tourist resorts Spain, and a whopping 58% cheaper than eating out and food shopping in Ibiza, which is the most expensive Spanish summer destination.

World Cup fans heading to the Costa Tropical will be celebrating the fact that a cold domestic beer in a bar is the cheapest in Spain at only €1.  In comparison, holidaymakers heading to the Costa del Sol can expect to pay the highest price for their “pint” at more than three times the price at €3.50 for a half litre.

Things to Do
Day trips and things to do are one of the biggest expenses of a summer family holiday. The average price of a day out at a theme park or water park, for a family of four, is €85.  Once again, the Costa Tropical tops the list of best value destinations for family-friendly activities, costing less than €50 for a family pass to a main attraction.

Surprisingly, Ibiza has the cheapest water parks costing from just €74 for a one-day family pass.

The Ritz-Carlton Yacht Collection Opens Reservations To The Public