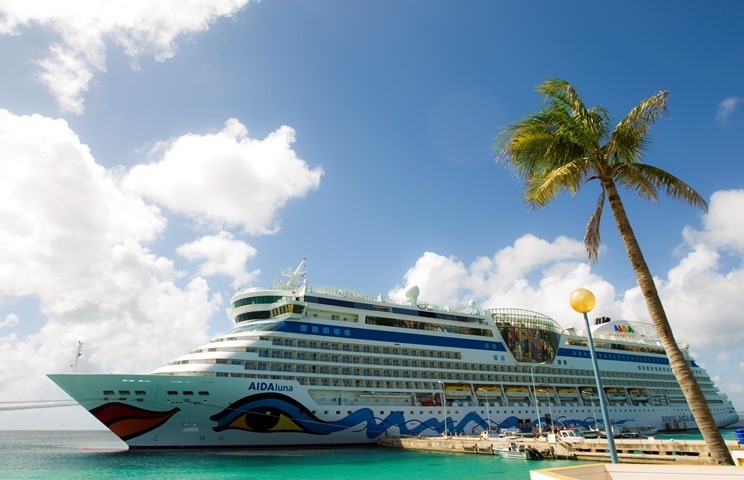 The Federal State of Schleswig-Holstein, the Federal State capital Kiel, the Seaport of Kiel and the Costa Group came together on Thursday, April 26, 2018, aboard the cruise ship “AIDAluna” to set out the ways in which they will be stepping up their existing collaboration. Their objective is to further develop the maritime infrastructure, the economy, and tourism in northern Germany sustainably and to make them future-proof.

Daniel Günther, the Minister-President of the Federal State of Schleswig-Holstein, Michael Thamm, CEO of the Costa Gruppe & Carnival Asia, Dr. Ulf Kämpfer, Mayor of the Federal State capital Kiel, and Dr. Dirk Claus, Managing Director Seehafen Kiel, signed a Declaration of Intent on the joint promotion of environmentally-friendly cruise tourism in the Seaport of Kiel, in the presence of Federal State Minister of Economic Affairs, Dr. Bernd Buchholz, Federal State Secretary of the Environment, Tobias Goldschmidt, and AIDA President Felix Eichhorn. For the Costa Group’s part, AIDA Cruises will support the Federal State of Schleswig-Holstein, the Federal State capital Kiel and the Seaport of Kiel with a diverse array of initiatives. The core points of the agreement include the construction of a shoreside power plant by SEEHAFEN KIEL on the Ostseekai (Baltic Quay), the use of low-emission liquefied natural gas to operate AIDA Cruises cruise ships while they are stay in port, and the use of modern exhaust gas cleaning systems.

Minister-President Daniel Günther: “With this Declaration of Intent we have taken a big step towards making cruise tourism in the north both more future-proof and environmentally-friendlier.” The Federal State intends to financially support the planned construction of the shoreside power plant on the Ostseekai and will be examining grant options. “We will also continue to advocate at federal level for the prorated exemption of shoreside power plants from the levy imposed under the German Renewable Energies Act,” the head of the Federal State government said.

Michael Thamm, CEO of Costa Group & Carnival Asia: “Sustainability, regional value creation and innovation are integral to our activities. We are very pleased that we are able to support the Federal State of Schleswig-Holstein and the City of Kiel in making cruise tourism forward-looking and sustainable. I am firmly convinced that this kind of partnership will have a beacon effect for other ports in Germany and in Europe.” In 2019 “AIDAprima” will be the first ship to call at the port of Kiel that can be supplied with liquefied natural gas (LNG) while in docked in port in the Baltic region. Furthermore, AIDA Cruises will be fitting out two other cruise ships – “AIDAbella” and “AIDAluna” with shoreside power connections. The aim is that trial operations will begin in Kiel already in 2019. In addition, AIDA Cruises intends that, apart from ships that can be supplied with low-emission LNG or shoreside power while docked in port, it will also deploy cruise ships in the Seaport of Kiel that are fitted with modern exhaust gas cleaning systems.

Federal State Minister of Economic Affairs, Dr. Bernd Buchholz: “This is an important step for the widespread acceptance of cruise tourism in Kiel, but also for the cruise company itself because the ships’ carbon footprints will increasingly affect guests’ booking behavior. AIDA is once again a technological pioneer in this area because the fleet’s new-builds are already fitted with LNG-powered generators.”

Federal State Secretary of the Environment, Tobias Goldschmidt: “We want to reduce air pollution in ports and their immediate environs by means of various measures. There are already alternatives to conventional on-board power generation with marine diesel, but they are not used on cost grounds. Support measures are required to change that. Apart from the previously mentioned financial support for the provision of the necessary infrastructure in the ports and the prorated exemption of shoreside power from the levy imposed under the German Renewable Energies Act, these measures most notably also include a port charges structure that favors low-emission alternatives. We have furthermore already called on the Federal Government to liaise with the EU Commission on uniform environmental standards – such as maximum values for sulfur content in ship fuels (SECA standards) – in the territorial waters of the Member States. In addition, the foreseen designation of the Baltic, North Sea and English Channel as a NOx (nitrogen oxides) Emission Control Area (NECA) should be expanded to all EU waters.”

Dr. Dirk Claus, Managing Director of Seehafen Kiel: “Shoreside power in the cruise industry is a challenge. However, with AIDA Cruises we have found a viable basis for tackling this issue that complements the powering of ships with LNG. We want to set new standards together.” The shoreside power connection on the Ostseekai will have a connected load of 12 MW and will be able to supply ships whose on-board power supply has a frequency of 50 Hz and 60 Hz. Kiel’s Mayor Ulf Kämpfer is particularly pleased about the commitment that the Costa Group and AIDA Cruises are making: “Ship exhaust is often also mentioned in the debate on air pollutants from diesel vehicles on Kiel’s roads. For cruise ships to be accepted in Kiel it is important that other cruise companies also devote themselves more to the issues of the environment and sustainability. First liquefied natural gas and soon shoreside power on the Ostseekai for AIDA ships – that is exactly the signal we want to send out for the future of the port of Kiel. And it also fits perfectly with the seaport of Kiel’s Blue Port concept that has just been drawn up.” Mayor Kämpfer also thanks the Costa Group and AIDA Cruises for their support of the “Kieler Woche” which has also just been agreed. The new event sponsor, AIDA Cruises, will be getting involved in a number of ways including presenting the closing fireworks at the “Kieler Woche”.

A study of the seaport of Kiel with AIDA Cruises as the industry partner will be investigating the direct and indirect effects of the cruise industry. The study is intended to help identify potential and activities for greater local and regional value creation by cruise tourism and maritime service providers.

Princess Cruises has announced an online contest through its social media channels offering the chance to win an eight-day cruise vacation in Australia onboard Majestic Princess for two guests. Departing on November 12...