American Cruise Lines is pleased to announce that its first new ship of2018, American Constitution, successfully passed Sea Trials last week in Chesapeake Bay. With the U.S.Coast Guard aboard, American Constitution underwent speed trials, an endurance run, and was thoroughly tested in all areas of safety and maneuverability. 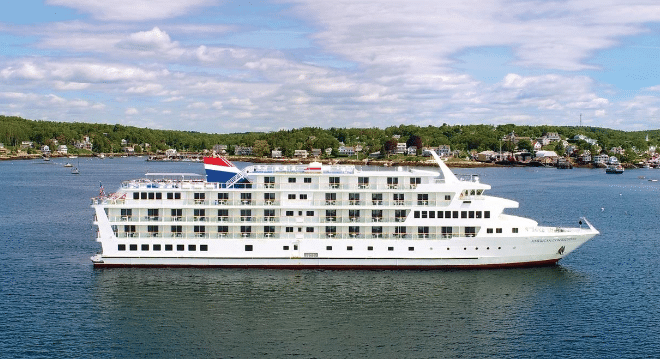 One of the new advanced features noted by Mr. Taiclet are new acoustical treatments and vibration dampening
systems throughout the ship, which make it extremely quiet even when running at full speed. Now that American Constitution’s Sea Trials are completed, the Line looks forward with great excitement to the ship’s inaugural cruise from Baltimore this Wednesday, April 18th. The first cruise will also be the Line’s first American Revolution Cruise—anew 10-night cruise around Chesapeake Bay that features ports central to our nation’s history. For the remainder of 2018, the new ship will stay on the East Coast, where it will run a series of trips in summer and fall from Boston, MA and New York, NY.
American Cruise Lines is proud of its commitment to building only new advanced ships. Every ship in the Line’s
expanding fleet is built to spec in the United States and showcases the finest American design and craftsmanship—all ships are U.S. crewed and flagged. American already maintains the largest fleet in the U.S. and continues to expand year after year.
American offers its passengers the widest range of gracefully appointed technically superior ships in the industry.
In 2018, the Line continues this tradition of excellence as American Constitution is now the newest and finest
ship available on the Eastern Seaboard.
Read Previous

Taj to open in Saudi Arabia