HRH The Prince of Wales paid a visit to Heathrow Terminal 5 this morning to meet some of the people tasked with safeguarding the UK’s busiest airport. 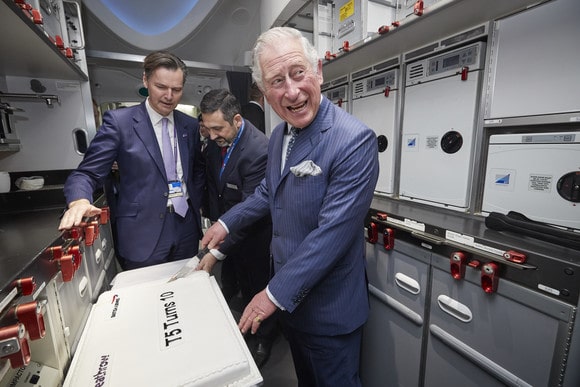 The Prince met a wide range of security personnel including, specialist Metropolitan Police officers, dog handling teams Border Force and Heathrow colleagues. He then took time to meet air traffic controllers who demonstrated their role in securing the skies.

As well as learning about how passengers and planes are kept safe, The Prince also heard more about how the UK Border Force work to ensure bio security measures are put in place to ensure the protection of the country’s biodiversity.

The trip coincided with the 10th anniversary of Terminal 5 and during the visit, His Royal Highness also boarded a British Airways 787 Dreamliner for a ‘tea party’ with the airline’s Chairman and Chief Executive Alex Cruz and colleagues.

During the reception His Royal Highness, a longstanding advocate of getting more young people into STEM subjects (Science, Technology, Engineering and Mathematics) also met apprentices and young people working in a wide variety of services throughout the airport.

Heathrow’s Chief Executive John Holland-Kaye said: “It was an honour and a privilege to be able to show His Royal Highness The Prince of Wales some of the great work being done here by our colleagues and partner agencies that keep our airport safe. Security will always be our priority and investing in people and technologies to ensure this, happens on a continual basis.

“Heathrow is the UK’s busiest airport with 78 million passengers travelling through last year. It is protected by leading intelligence services, a designated Police Force and dedicated security colleagues that work 365 days a year. It is a real boost for them to meet The Prince who thanked them all for their work.

“Some of the most advanced passenger security and technology in the world can be found here at Heathrow and it was fantastic to show these to The Prince of Wales.”

The visit and tour took place one decade on from the opening of Terminal 5 in 2008, by Her Majesty Queen Elizabeth II.