Boeing, Turkish Airlines Finalize Deal for Up to 30 787 Dreamliners 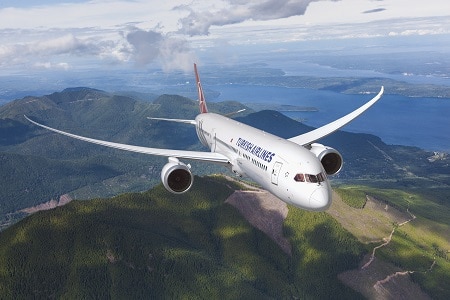 Boeing and Turkish Airlines announced they have finalized a firm order for 25 787-9 Dreamliners with options for five more airplanes. The firm order will allow Turkey’s flag carrier to further meet the growing demand at its home airport, Istanbul’s third airport, and improve the flying experience for passengers.

With this firm order – first announced as a commitment last September – Turkish Airlines becomes the 71st customer to buy the 787.  Together, these customers have now ordered more than 1,300 Dreamliners, the fastest-selling twin-aisle airplane in Boeing history.

Turkish Airlines has continued to expand its fleet of Boeing airplanes. Recently, the airline grew its stable of 777 jets with a purchase of three more 777 Freighters.  The airline also uses electronic charts and some other services from Boeing Global Services to further optimize its operations and operational systems.