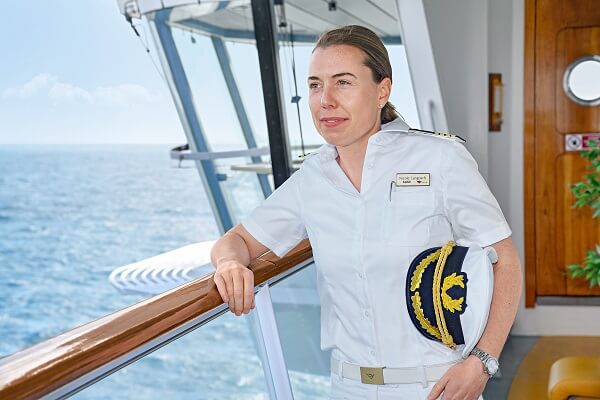 Starting now, Nicole Langosch (34) will be in charge of AIDAsol. This makes her the first female captain in the AIDA fleet and highest-ranking woman on a cruise ship in Germany.

Starting now, Nicole Langosch (34) will be in charge of AIDAsol. This makes her the first female cruise ship captain in the AIDA fleet and highest-ranking woman on a cruise ship in Germany.

Nicole Langosch was born in Osterode and grew up in Herborn in Hesse. Sailing was her first introduction to seafaring. She completed her nautical science studies in Leer. During her subsequent study program in logistics, she worked for a container shipping company in Oakland (New Zealand) and for the EU parliament in Brussels. Her first nautical internship was on a container ship. Langosch has held various positions on AIDA ships over the past ten years.

“I’m proud to work at a company that promotes the careers of young women and that has made it possible for me pursue my dream profession. I look forward to my new role as a first female cruise ship captain on board AIDAsol and am aware of the great responsibility,” says Langosch.

With a length of 253 meters and width of 32 meters, AIDAsol is one of 12 ships in the AIDA fleet and currently travels between the Canary Islands and Madeira. On March 25, 2018, Captain Langosch will be navigating the ship to Hamburg. From here, the ship will depart on April 7, 2018, for Northern Europe and Norway.

AIDA Cruises currently employs 14 female nautical officers on board its fleet. With tailored, collaborative training and a dual study program in partnership with the University of Wismar, AIDA Cruises offers an innovative educational concept for nautical science in Warnemünde.