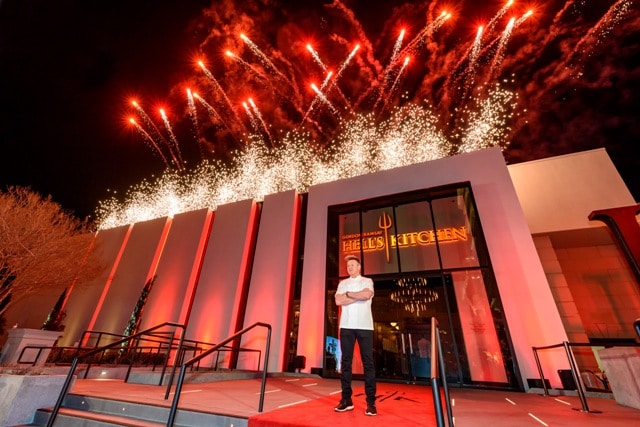 Multi-Michelin star chef and television personality Gordon Ramsay, joined by the finalists of Season 17 HELL’S KITCHEN All-Stars and famous faces from the sports and entertainment world, celebrated the official grand opening of the first-ever Gordon Ramsay HELL’S KITCHEN restaurant at Caesars Palace in Las Vegas. Since its soft opening in early January, the highly-anticipated restaurant has already received reservations for nearly 25,000 guests.

Designed to be an experiential and immersive destination restaurant, guests at Gordon Ramsay HELL’S KITCHEN will feel transported to the studio set of the globally popular FOX television show. The inspiration from the hit show is evident from the signature fiery pitchfork – direct from the set of the popular TV show – that marks the entryway, to the life-size video screen of Chef Ramsay that greets guests upon arrival, to the chef uniforms and menu items. The winner of current Season 17 of HELL’S KITCHEN All-Stars will be named Head Chef and have portrait hung with the other previous champions on the winner’s wall.

“We responded to fans of the show who were hungry for a real-world HELL’S KITCHEN restaurant for some time – pun intended,” said Ramsay. “What we didn’t fully realize was just how enthusiastic the response would be. We are thrilled with the reservations and interest since announcing our opening, and excited to welcome guests to experience the best of HELL’S KITCHEN – great food, and great cocktails.”

Masterfully designed by Jeffrey Beers International, the first-of-its-kind restaurant boasts design features that are engaging to all senses and are a nod to both the red and blue teams featured on the show. The dynamic and bustling kitchen is the centerpiece of this unique eatery, with mosaic tiles framing the open space artfully, allowing guests to appreciate from every seat in the house. Chefs and cooks in the kitchen will be in the exact uniforms from the show – red and blue jackets with coordinating bandanas. To further bring the electric atmosphere of the studio into the dining room, additional key elements of the show are infused in the design, such as fire and heat and custom designed lighting that combine brass rods with pitchfork features and runs across the high ceilings. HELL’S KITCHEN’s iconic “H” and pitchfork symbols are cleverly featured throughout the custom-designed, laser-cut screen partitions and soft charcoal and ash-hued wallcovering.

Several of the most successful signature menu items and recipes featured on the television show can now be experienced during lunch and dinner including Pan Seared Scallops, Lobster Risotto, Beef Wellington, Truffle Arancini, Brick Pressed Chicken and Crispy Skin Salmon. Special menu items direct from the show will be added as new episodes air.

To perfectly complement the cuisine or to simply enjoy at the restaurant’s sprawling bar, the cocktails at HELL’S KITCHEN are not to be missed. The signature creations include the gin-based Notes from Gordon, garnished with a scroll printed with a surprise note from Gordon Ramsay; the citrus and rosemary laden Chef’s Stew, served bubbling and steaming from dry ice; and the rye-based Smoke on the Blvd, which arrives in a cherry-wood smoke-filled glass cabinet. The restaurant also boasts an expertly curated wine list with over 20 wines offered by the glass. The beer list is also notable with more than 30 options, and includes an exclusive HELL’S KITCHEN Special Brew IPA from Stone Brewing.