Marriott International will debut its St. Regis Hotels & Resorts brand in Hong Kong by early 2019 in collaboration with China Resources Property. St. Regis Hong Kong will be the first property for the St. Regis brand in the city. 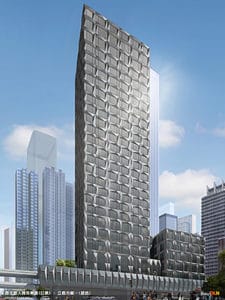 The St. Regis Hong Kong will be located on Hong Kong Island (rather than Kowloon) in the Wan Chai area, and will be very close to the convention center.

With interiors created by acclaimed Hong Kong-based designer, André Fu, the 25-story St. Regis Hong Kong will offer 129 guest suites, many of which will feature stunning views across Victoria Harbor and Kowloon Bay. Guests will enjoy the brand’s legendary St. Regis Butler Service, signature Chinese and French restaurants, a 320-seat banquet hall and a heated swimming pool, among other luxurious amenities. An open-air terrace next to a grand Lobby Lounge will provide the ideal venue for al fresco gatherings, and a St. Regis Bar will serve up the hotel’s rendition of the brand’s signature cocktail, the Bloody Mary.

The glamorous, fast-paced city of Hong Kong has long been considered a place where ‘East Meets West’, due to the fusion of its deep Chinese roots and its recent history as a British colony. Beneath its ultramodern, 21st-century façade of glittering skyscrapers and world-class infrastructure, old traditions remain and ancient concepts such as feng shui are still deeply respected throughout the city. Truly a cosmopolitan city and a hub for international finance and trade, Hong Kong still boasts age-old Cantonese cuisine found in small noodle shops next to chic designer boutiques.

St. Regis Hotels & Resorts is one of the world’s fastest growing luxury brands, more than doubling its footprint in recent years. There are currently more than 40 St. Regis branded hotels open worldwide, with nine properties in the Greater China region.