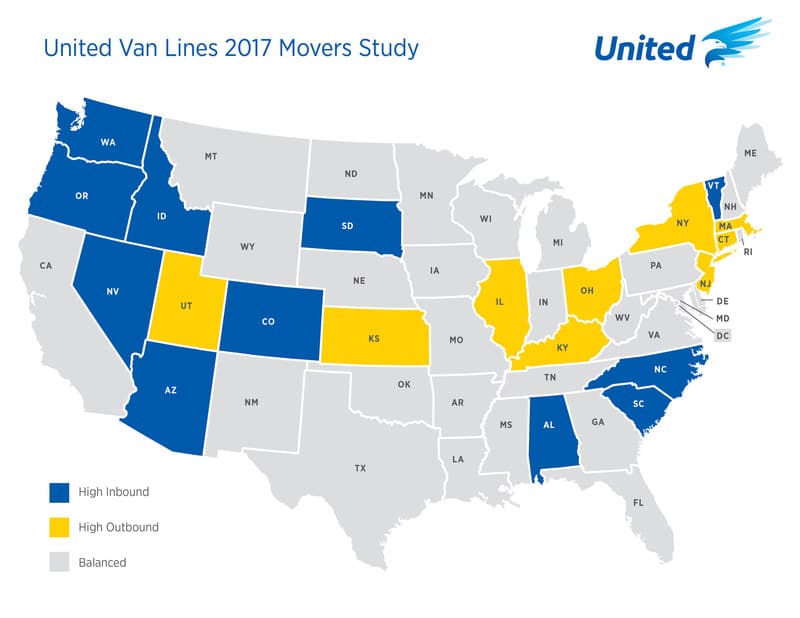 Americans are moving westward, flocking to the Mountain and Pacific West, while the Northeast and Midwest continue to lose residents. In 2017, more residents moved out of Illinois than any other state with 63 percent of moves being outbound. Vermont had the highest percentage of inbound migration in 2017 with nearly 68 percent of moves to and from the state being inbound. Those are the results of the United Van Lines’ 41st Annual National Movers Study, which tracks customers’ state-to-state migration patterns over the past year.

As a region, the Mountain West continues to increase in popularity with 54 percent of moves being inbound. The West is represented on the high-inbound list by Oregon (65 percent), Idaho (63 percent), Nevada (61 percent) Washington (59 percent), and Colorado (56 percent). Of moves to Oregon, the highest ranking western state, a new job or company transfer (49 percent) and proximity to family (24 percent) led the reasons for most inbound moves.

“For more than 40 years, United Van Lines has been tracking which states people are moving to and from. We also survey our customers to understand why they are moving from state-to-state,” said Melissa Sullivan, director of marketing communications at United Van Lines. “As the nation’s largest household goods mover, the data we collect is reflective of national migration trends.”

“This year’s data reflects longer-term trends of movement to the western and southern states, especially to those where housing costs are relatively lower, climates are more temperate and job growth has been at or above the national average, among other factors,” said Michael Stoll, economist and professor in the Department of Public Policy at the University of California, Los Angeles. “We’re also seeing continued migration to the Pacific Northwest and Mountain West as young professionals and retirees leave California.”

The Mountain West was the most popular destination for retirees with one in four movers indicating they chose to move to this location for retirement. Top regions attracting movers taking new jobs included the Midwest (61 percent) and Pacific West (59 percent). The region with the largest exodus of residents due to finding jobs elsewhere was the South (61 percent). Across all regions, nearly one in five of those who moved in 2017 moved to be closer to family.

United Van Lines has tracked migration patterns annually on a state-by-state basis since 1977. For 2017, the study is based on household moves handled by United within the 48 contiguous states and Washington, D.C. This study ranks states based off the inbound and outbound percentages of total moves in each state. United classifies states as “high inbound” if 55 percent or more of the moves are going into a state, “high outbound” if 55 percent or more moves were coming out of a state or “balanced” if the difference between inbound and outbound is negligible.

Moving In
The top inbound states of 2017 were:

Moving Out
The top outbound states for 2017 were:

Illinois (63 percent) moved up one spot on the outbound list to No. 1, ranking in the top five for the past nine years. New Jersey previously held the top spot for 5 consecutive years. New additions to the 2017 top outbound list include Massachusetts (56 percent) and Wisconsin (55 percent).

Balanced
Several states gained approximately the same number of residents as those that left. This list of “balanced” states includes Nebraska and New Hampshire.

The government of Switzerland has announced that tourists from the UK will be allowed to enter Switzerland without having to quarantine if they can show proof of being fully vaccinated from June 26. The same rule...

Travelers can now enter Greece with a negative result of the COVID-19 rapid antigen test. In addition, Greece will exempt children under the age of 12 from the COVID-19 requirements, including proof that they have...