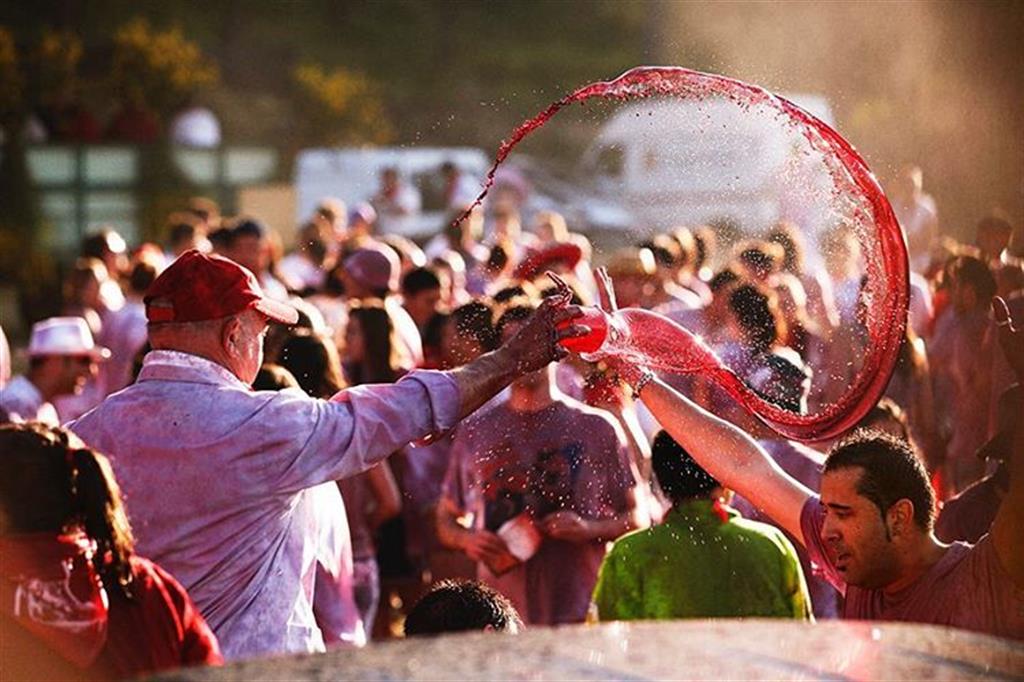 If you are looking for wine-related holiday ideas this summer, why not take in one of Europe’s wackiest wine celebrations.

At the end of June, the small village of Haro in the wine-growing La Rioja region of Spain, hosts La Batalla del Vino – probably the greatest, wildest wine festival and food fight that you have never heard of, only rivalled for sheer messiness by La Tomatina tomato food fight festival that takes place Buñol, near Valencia, at the end of August.

La Batalla del Vino – the Battle of the Wine – takes place during the annual wine festival in the town of Haro and has been declared a fiesta of national tourism interest since 1965. The general purpose of the wine festival, like all wine festivals, is to celebrate the harvest and to consume copious amounts of locally produced Rioja wine, with an unusual added twist.

In the early hours of the 29th June each year, fortified by the previous evening’s wine consumption and festivities, the villagers and visitors don white tops and red neckerchiefs and traipse 6 km uphill to the trucks full of 75,000 litres of wine waiting at the “battleground” located in front of the small hermitage at “Los Risicos de Bilibao”. The pilgrimage is led by the Mayor of Haro who enjoys one of his mayoral perks by travelling on horseback instead of on foot.

The origins of this tradition date back to 12th century when there was a land dispute between the neighbouring towns.  The dispute was eventually settled that the land at “Los Risicos de Bilibao” came under the jurisdiction of Haro, but the Haro villagers had to mark the borders of their territory on an annual basis with a purple flag or the land would cede ownership to the neighbouring village of Miranda de Ebro.   And so, the annual pilgrimage came about with the pilgrims celebrating a mass at the hermitage on the morning of 29th June every year, followed by the village Mayor planting a purple flag at the highest point.

As was the custom, the villagers would rest and eat at the location, with the sun on their back, until one year, the legend has it, in 1710, one parishioner decided to refresh a fellow traveller by drenching him in wine from his wineskin, triggering the tradition of the Battle of the Wine, or the Wine Baptisms as they are also known.

As soon as the mass has finished and the Mayor has planted the flag, it is open season with any and all weapons that can contain wine to be thrown, sprayed, or daubed on the crowd; buckets, wineskins, crop sprinklers or water pistols.

After the bloodless Battle of the Wine, those with the stamina of an ox who have not succumbed to drunkenness by osmosis, continue the festivities with the purple-tinted, wine soaked throng heading back into town at midday to continue to eat, drink and continue the merriment.

“Wine tourism is a growing industry in Spain.  Latest figures show that 2,124,229 tourists experienced wine tours around the vineyards and bodegas in the main wine growing regions of La Rioja, Ribera del Duero, the cava producing region of Penedes, and the sherry producing region of Jerez in 2015, up 25.75% from the previous year,” explains Jannich Petersen, COO of Spain-Holiday.com.

“The high season for visiting the wine regions tends to be during Autumn, in September and October, and for this reasons, the festival season of June, July and August including the Wine Festival of Haro are still relatively off the radar for the international tourists. “

Spain-Holiday.com has put together an infographic of other insane food fight festivals in Spain that have not yet gained worldwide fame (or notoriety) like La Tomatina including a sweet meringue fight “La Merengada” in Catalonia, a flour and egg fight in a farcical military coup in Alicante, and a grape throwing battle in Valencia.

Spain-Holiday.com is the leading holiday rental website in Spain with over 10,000 properties available from family friendly apartments to luxury villas, country cottages, and front-line beach properties throughout mainland Spain, the Balearic Islands and the Canary Islands.

For the freedom to discover hidden gems and live like a local in the wine producing regions and surrounding virgin Spanish countryside, Spain-Holiday.com has a great selection of country holiday rentals with 2 bedroom country houses starting from £105 per week.