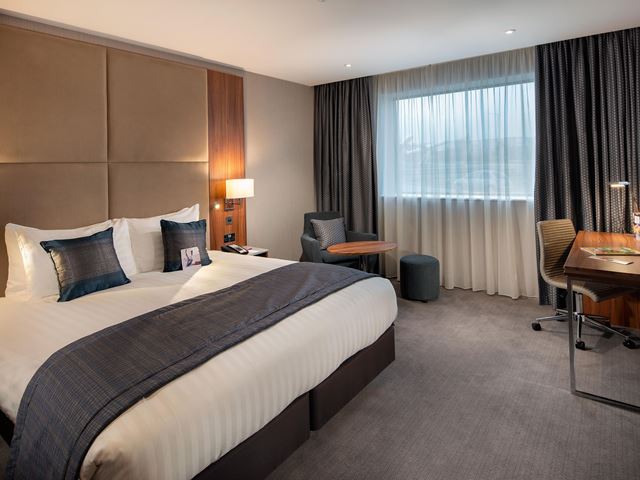 Crowne Plaza hotel properties in Mexico, Latin America and the Caribbean have announced a series of multi-million dollar renovations to some of the brand’s most iconic properties in the region. The Crowne Plaza brand is part of InterContinental Hotels Group (IHG®), one of the world’s leading hotel companies.

In addition to these renovations, IHG previously announced its Crowne PlazaAccelerate plan, in July 2016. The plan includes a $200 million investment into properties throughout the Americas region and a newly launched marketing campaign that aims to ensure that the brand remains at the forefront of the new way of doing business with design-led, culturally-relevant and technology-enabled solutions. The new campaign, “We’re All Business, Mostly,” demonstrates an important milestone in the transformational journey as the Crowne Plaza brand reaffirms its commitment to making business travel more fulfilling for the modern business traveler.

In Mexico, Central, South America and the Caribbean, Crowne Plaza hotels’ multi-million renovations and upgrades encompass guestrooms, lobbies, restaurants, facilities and public areas – including meeting rooms, business centers, gyms, as well as technology – in order to remain a cutting-edge option for today’s modern business travelers. The hotels are also currently implementing elements of the new brand hallmarks, which enable modern-day business travelers to sustain a lifestyle that seamlessly blends work and personal pursuits. Most renovations and new program implementations are underway and are expected to be completed in 2018.

Jorge Apaez, Chief Operating Officer, Mexico, Latin America and Caribbean, IHG® said: “Owners of IHG hotels continue making significant investments to modernize their hotels because they trust and have tremendous confidence in the Crowne Plaza brand. Today’s Crowne Plaza renovations, upgrades and implementation of new programs fall directly in line with the standards and hallmarks we offer our loyal guests: a brand promise and service designed to help modern business travelers accomplish what’s important both at a professional and personal level.”

Some of the region’s Crowne Plaza properties that have undergone renovations include:

Since Crowne Plaza’s Accelerate Plan launched in June of 2016, IHG announced at New York Fashion Week that New York-based designer Timo Weiland had been appointed Style Director for the Crowne Plaza® brand and would develop new uniform designs for the hotels in the Americas.  His newly designed collection, Momentum by Timo Weiland will further enhance the properties’ refresh journey taking place throughout the region. The new Crowne Plaza uniforms will be worn by all hotel team members in Mexico, Central, South America and Caribbean, by the third quarter of 2017.

Chester-based Shamin Hotels is placing finishing touches on the newly renovated The Landing at Hampton Marina, Tapestry Collection by Hilton. The iconic nine-story hotel located in downtown Hampton was one of the first...

Hampton by Hilton to Open Two New Hotels in Poland

Hilton today announced plans to open two new Hampton by Hilton hotels in Poland, following the signing of two franchise agreements. Hampton by Hilton Bialystok will be developed by Rogowski Development and managed...