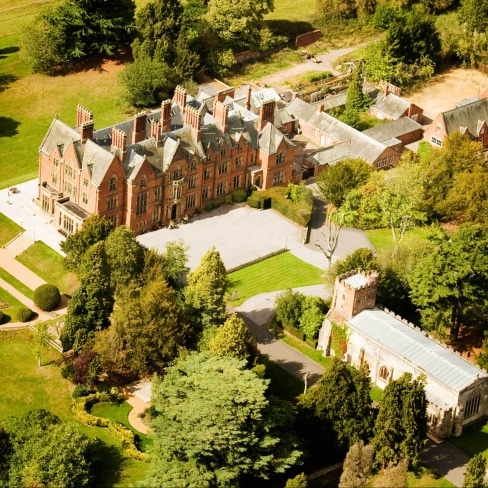 Shakespeare’s England is delighted to announce a number of exciting news and developments regarding its hotel offer throughout 2017. Many of its hotels will be celebrating anniversaries, undertaking refurbishment programmes and launching new packages. Make 2017 the year you take a short break or longer holiday in Shakespeare’s England.

Arden House in Stratford-upon-Avon opened on 1 November 2016, a new venture for Eden Hotel Collection. The intimate 10-bedroom, boutique sister property to the well-established hotel ‘The Arden’ has a relaxed home-from-home atmosphere and dedicated ‘house hosts’ who offer a 24-hour service. A chef will prepare breakfast and afternoon tea for guests (included in the price) who are invited to gather around an informal dining table. Drinks (five o’clock is gin o’clock) and a well-stocked pantry of snacks are included and guests can choose drinks from the honesty bar. An overnight stay costs from £229 per room (2 sharing).

The Welcombe Hotel in Stratford-upon-Avon celebrated its 150th anniversary on 24 November 2016. The luxury country house hotel has also had a book published on the history of the hotel, to coincide with the anniversary.

A new Hotel du Vin will open in Stratford-upon-Avon with 48 bedrooms. The Stratford hotel will be the second for the chain in the Midlands. Facilities will include a bistro du vin, meeting and private dining rooms and a banqueting room with the capacity to seat 80.

Elan Spa at Mallory Court will open in March.  The luxury spa will have a separate entrance to the hotel providing a secluded setting.  Elan Spa will use the latest energy efficient techniques and state of the art design to create a spa in keeping with the listed building.

The former Holiday Inn in Stratford-upon-Avon has undergone refurbishment works to transform it in to a Crowne Plaza hotel. The hotel, which is set amid landscaped gardens beside the River Avon, has had all 259 bedrooms upgraded and enhanced.

Radcliffe, one of Warwick Conference’s training and conference centres has announced plans for a major refurbishment. Situated on the University of Warwick campus, the refurbishment will include a new heating system, refurbishment of the bedroom bathrooms, public bathrooms, lounge and meeting & syndicate rooms.  Warwick Conferences has also invested in a new, full serviced catering van, which will allow the team to deliver its award-winning food offering while travelling up and down the length and breadth of the country.

Macdonald Swan’s Nest Hotel in Stratford-upon-Avon will refurbish 20 bedrooms. The remaining 48 rooms were refurbished in 2008 but will also be re-decorated.  Macdonald Alveston Manor Hotel will reveal its brand new suite plus will undertake a full refurbishment of the 11 bedrooms in the Manor House, recreating their original Tudor style features. The 94 bedrooms in the modern extension will also be refurbished.

Mercure Warwickshire Walton Hall Hotel & Spa is launching a package for 2 adults and 2 children in an apartment with dinner, breakfast and entrance to Warwick Castle for just £149.

Stratford Manor & The Stratford Hotel are launching a partnership with two attractions. One promotion includes 2 nights’ accommodation, 1 dinner and 2 tickets to Warwick Castle for 2 adults from £239 at The Stratford Manor. The second is a 2 night package with dinner on 1 night and tickets to the British Motor Museum at £9 instead of £15 and is available at both hotels. The hotels are also launching their new ‘Meet off Peak’ promotion offering discounted rates for conferences & meetings held on Monday & Fridays.

The Peach Pub Company, which runs four pubs in Warwickshire including The One Elm in Stratford-upon-Avon and the Rose & Crown in Warwick, has appointed its first Property Director as its next step towards becoming a 22 strong, £35 million a year pub business.  Simon Bishop takes the reins in the newly created role, with a remit to source and acquire new properties that the award-winning independent pub company can make peachy.  He will also look after property matters for Peach’s 17 existing pubs and boutique hotel.