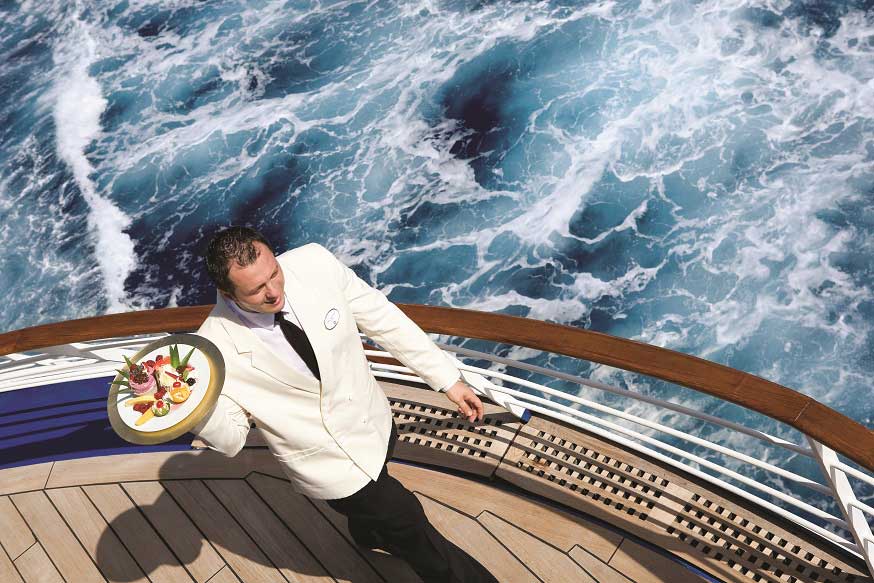 Imagine being on a cruise ship as if you were visiting your best friend’s house or sitting at your grandmother’s dining room table. Everyone knows your name, knows what you like to eat and drink and what you like to do.

It’s the ultimate in personalized vacations and it’s coming soon to ships operated by Carnival Corporation. The cruise company is debuting proprietary, patent-pending wearable technology like nothing ever seen before for land-based or cruise vacations.

A quarter-sized disk called Ocean Medallion sends wireless signals to thousands of sensors embedded throughout your cruise ship to enable a personal digital concierge. All you need to do is carry the tiny medallion to experience highly personalized services that are tailored especially for you.

What sounds dreamlike and futuristic will be the reality for all passengers on the company’s Medallion Class ships, beginning with the Regal Princess from Princess Cruises in November, and followed by Royal Princess and Caribbean Princess in early 2018. Plans are for Ocean Medallion Class to eventually roll out to the entire Princess Cruises fleet as well as to others among Carnival Corporation’s 10 brands and more than 100 ships worldwide.

The Ocean Medallion weighs only 1.8 ounces, is waterproof and fits into your pocket or purse or can be attached to an accessory such as a bracelet, necklace or keychain.

The Medallion arrives at your home as a gift before your cruise, or is made available for pickup at your arrival airport or the ship pier. It is laser-etched with your name, ship and date of sailing and can be kept after your cruise as an enduring memento. It contains no personal information and can be replaced immediately if lost.

But while Ocean Medallion may look as innocuous as a poker chip, it’s much more valuable.

The custom-developed technology is so cutting edge, and so far beyond what any service provider has ever done before, that it was star of the show at this year’s CES event, the world’s largest consumer technology showcase held annually in Las Vegas the first week in January.

“Some of the best things come in small packages,” says Carnival Corporation CEO Arnold Donald, who became the first travel industry executive to give the tech show’s opening keynote address. “We’re taking the guest experience to a level never before considered possible.”

The idea behind Ocean Medallion Class cruising was to use cutting-edge technology so that each guest is treated in a highly individual way based on personal preferences rather than part of a crowd.

The resulting Ocean Medallion is a “wow,” says Joe Pine, co-author of “The Experience Economy” and an internationally known expert on consumer experiences and customization.

“It’s not just smart technology, it’s genius,” says Pine. “This is doing everything with this technology that we’ve imagined. Carnival Corporation is providing a wearable device that requires almost nothing to be able to carry around because it’s so small, and yet it allows the entire ship to morph around ‘me.'”

The Ocean Medallion makes payment for goods and services onboard and entry to your room seamless. There is no requirement for guests to tap the Medallion against a pad or anything of that sort. You just have it with you and it works, so it doesn’t feel like technology or require a guest to learn how to use it. In fact, it doesn’t even have an on and off switch or need to be charged.

“It’s incredibly simple,” Pine says. “You don’t even feel like you have technology on you. You just carry Ocean Medallion around and then things just start to happen.”

Before you leave home, you can set your preferences online to accelerate making your experience personal from the very beginning.

For example, when you arrive for your cruise, personnel with handhelds will greet you by name. Then doors will open, literally. By completing the pre-cruise regulatory information, you will be deemed Ocean Ready and can walk right on to the ship (no waiting in boarding lines).

When you get to your stateroom, the stateroom entry is not just a portal to your vacation home, but a portal for your digital concierge to begin helping you personalize your cruise and make the most of what you like to do while on your vacation.

Later, when you head to a restaurant, your servers will know your food preferences, or you like champagne or that you’re celebrating your birthday or that you have a food allergy — and make suggestions accordingly.

No more transactions, as each interaction builds on the next, making your cruise feel like it is just for you. That’s where convenience meets fun.

Visit a bar and a smiling bartender will greet you by name and know your preferred drink (based on your past habits).

Visit the photo gallery and on your approach a digital display will spring to life with photos of you and your co-cruisers as snapped by shipboard photographers. Watch a live show from your stateroom (if you prefer to stay in) and you may get a shout-out from the entertainers.

The Ocean Medallion does not contain any personal information, and for security reasons information in the system is encrypted. Every time a passenger makes a purchase, it’s linked to his or her security photo (so no one else can charge to your account). If the Medallion is lost or missing, it can be deactivated and a new one will be issued.

Ocean Medallion pairs with Ocean Compass, the personal concierge interface that guests can access 24/7 on their own smartphones or smart pads, as well as on 4,000 portals throughout the ship. In addition to being an easily accessible reservation system for spa appointments and such, the Compass sends personalized invitations to activities you might like.

If you’re a wine lover, for instance, you may get an invite to a wine tasting. Fitness fanatics may get a message that there’s a Zumba class to consider.  You can say yes or no to the invitations (or turn off the invitations if you aren’t interested).

With Ocean Compass you can also create your own customized experiences. Say you are heading poolside and craving an icy piña colada. Ocean Compass has an on-demand feature called Here & Now/There & Then that allows you to pre-order. When you approach the pool area, servers will know and will deliver your drink to you.

Other nifty features on Ocean Compass include anytime and anywhere access to a new gaming platform and a point-to-point navigational feature to help you find your way around the ship. There’s also a way to track and communicate with family and friends onboard (if you so desire).

The ultimate intelligent ship can’t yet tuck you in, but at technology-forward Carnival Corporation nothing seems out of the realm of future possibilities.

Considering the limitations still in place in some European countries, and in light of the current epidemiological situation, Costa Cruises today announced updates to its upcoming cruises for winter 2020-2021...

Due to the uncertainty about when international travel restrictions might be lifted, Princess Cruises is extending its pause in operations for cruises departing from Australia and New Zealand through May 31, 2021...

Costa Cruises today presented its programs for the 2021-2022 season in South America during an online conference led by Dario Rustico, the brand’s general manager for Central and South America. For its restart in...