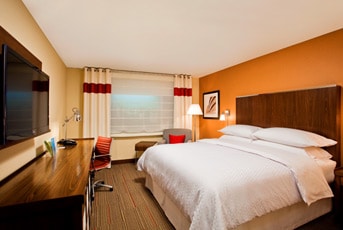 Owned by Cleveland Star Real Estate Investments, LLC, the recently renovated Four Points Cleveland Airport features 147 spacious guest rooms and 6,500 square feet of flexible, state-of-the-art meeting space. Amenities include an indoor heated pool, a 24-hour fitness center, a business center, and fast and free Wi-Fi throughout the hotel. Guests will enjoy full-service dining and the brand’s iconic Best Brews and BBQ™, including refreshing local beers and seasonal BBQ-style appetizers at the hotel lounge. Four Points Cleveland Airport is convenient to Progressive Field, FirstEnergy Stadium (Home of the Cleveland Browns), the University of Cleveland and the shops, restaurants and entertainment in The Flats.

“We are thrilled to bring Four Points to Cleveland and anticipate the hotel will help meet rising demand for high-quality lodging in close proximity to the airport and downtown,” said Paige Francis, Vice President, Global Brand Management, Four Points. “Four Points is consistently a top choice for owners and developers seeking to reposition existing assets, and conversions like these are a big contributor to the brand’s growth in North America.”

AC Hotels by Marriott opens of its first property in the Swedish capital, AC Hotel Stockholm Ulriksdal. Built with a perfect blend of form and function, the hotel offers travellers the ideal base to discover the...

Though holidaymakers the world over dream of visiting the Maldives, they have rarely ventured to this island nation in pursuit of tennis. Still, for some time now guests at Vakkaru Maldives in the idyllic Baa Atoll have...