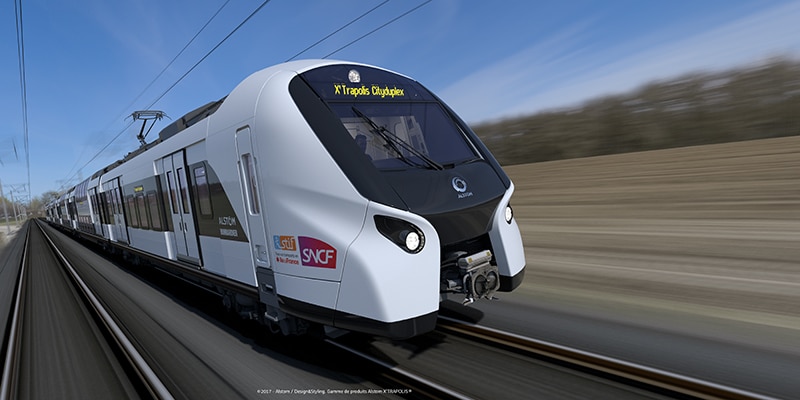 At its board meeting, SNCF selected the Alstom-Bombardier consortium to renew the trains on lines D and E of the Île-de-France network.

This contract for 255 trains (130 for the RER D and 125 for the RER E), worth an estimated 3.75 billion euros, is the largest contract ever financed by STIF.

For Valérie Pécresse, President of the Île-de-France Region and of STIF, “SNCF’s decision turns a historic order, placed by STIF in July 2016 to carry out a revolution in transport, into reality. More than 700 trains will be purchased or renovated to modernise the existing rolling stock, which is on average over 30 years old. It is the daily life of the inhabitants of Île-de-France and the passengers on lines D and E that will change. From 2021 onwards, they will discover a new generation of trains, safer and more reliable as well as more comfortable and regular. The order will also have a positive effect on the rest of the network: 15% of RER A traffic will be transferred to line E, which will be extended to Nanterre in 2022, then as far as Mantes-la-Jolie in 2024.”

Alstom, in partnership with Bombardier, will design and supply the new generation of two-tier equipment for lines D and E of the Île-de-France network, which is operated by SNCF Transilien. The first firm part of the order comprises the delivery of 71 trains [1] for an estimated 1.55 billion euros, 100% funded by STIF (this amount includes all design studies, industrialisation, project management and homologation for a value of 450 million euros). These first 71 trains will be delivered and enter circulation from 2021 onwards. The Alstom-Bombardier consortium’s share for this first part of the contract is worth 1.155 billion euros [2] (approximately 70% Alstom – 30% Bombardier).

This “boa” train is entirely open (without separations between the cars) and was specifically designed for the dense zones of traffic in Île-de-France. Thanks to its large doors, the train provides extremely fluid passenger exits and entrances as well as offering three distinct travel spaces. Passengers can thus choose their space according to their journey time: platform zones for travelling standing-up when the journey is very short, making it easy to move around, like in the metro; mixed-use zones (standing or sitting) located lower down for journeys under 20 minutes, and higher up, areas offering regional-style comfort with more seating for longer trips. In each of the end cars, platforms provide wheelchair users with direct and quick access to dedicated spaces. Air conditioning, lighting and seating have all been designed to provide a high level of comfort.

For Guillaume Pépy, “today we conclude the largest tender for rolling stock ever launched by SNCF. 255 trains (130 for the RER D and 125 for the RER E) for an amount of 3.75 billion euros is clearly excellent news for our passengers. We will therefore have a train that meets the specific needs of SNCF Transilien and the ultra-dense area of Île-de-France (70% of SNCF customers on 2.2% of French territory). We must be better prepared for yearly increases in traffic (+ 7% of customers between September 2015 and September 2016) and this innovative new-generation train will be an undeniable asset in meeting this challenge in the capital region and in improving the punctuality of lines E and D.”

Based on Alstom’s urban and suburban equipment solutions and enhanced by feedback from its customers, the train, baptised X’Trapolis Cityduplex, will guarantee the highest levels of availability, reliability and safety. Each train can transport up to 1860 passengers in its 130m version. Numerous innovations will reduce energy consumption by 25% compared to previous generations of equipment. The train notably contains 8 motor bogies to provide superior performance compared to previous generations in terms of acceleration and deceleration with regenerative braking, an undeniable asset for exploitation.

“We are very proud of the renewed confidence placed in us by SNCF and STIF. The consortium that we have formed with Bombardier has very solid experience of projects in Île-de-France and the requirements of our customer SNCF Transilien. This train represents a major technological leap forward that will improve the travelling experience of every passenger in the Île-de-France region. It also offers the operator a lower cost of ownership over the long term,” says Henri Poupart-Lafarge, Chairman and CEO of Alstom.

To carry out this major project successfully, a total of around 2,000 people will work on the project under the Alstom-Bombardier consortium, including 550 experienced engineers, securing more than 8,000 jobs in the French rail sector. Eight Alstom sites in France will be responsible for designing and manufacturing the new equipment: Valenciennes for the project management, design, validation, tests, commissioning and warranty, end vehicle production and final train integration; Reichshoffen for the studies, Ornans for the engines, Le Creusot for the bogies, Villeurbanne for the on-board electronics, Tarbes for the traction systems, Petit-Quevilly for the transformers and Saint Ouen for the design. The Bombardier site in Crespin will be responsible for designing and manufacturing the intermediate cars.