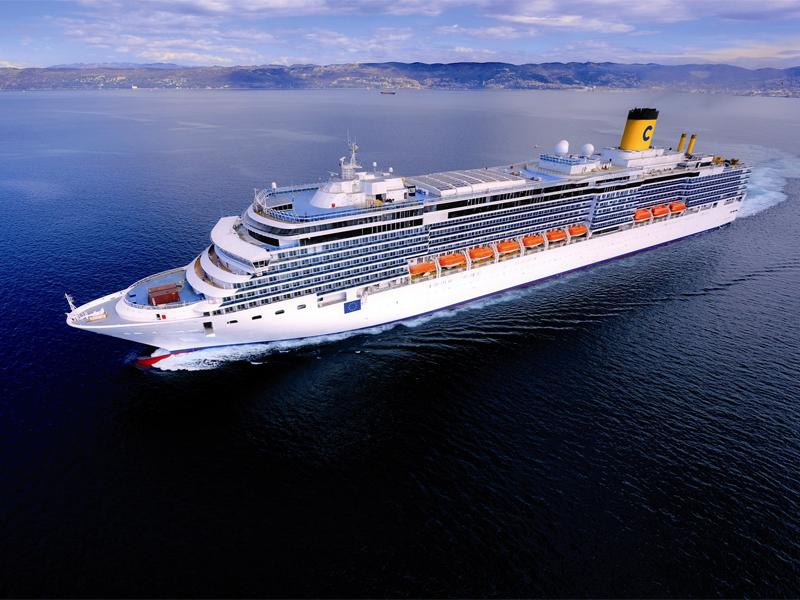 The Costa Cruises 2017 Around the World Cruise will set sail from Savona on 6 January on board Costa Luminosa: a thrilling 106-day journey that will take guests on an exploration of the most wonderful sights on 5 continents, across 3 oceans and visiting 35 destinations, before returning to Savona in Italy on 22 April 2017. This special cruise is a Costa exclusive, offered each year since 2011, after the cruise’s great success in the ’70s and ’80s. It is every traveller’s dream: a truly unique opportunity to circumnavigate the globe in slightly more than three months, following in the footsteps of history’s great navigators, and coming into contact with magnificent cultures and enjoying spectacular scenery.

Just over 2,000 cruise passengers have reserved a cabin on the 2017 Around the World Cruise. They hail from 37 different countries, the majority from France (around 600), Germany (just under 500), Switzerland (around 300), Italy (over 200) and Spain (around 150). The oldest explorer, a man from Switzerland, is 96 years old, and the youngest is a little Italian girl who is just 2.

A special highlight of the Costa Cruises 2017 Around the World Cruise is that it will cross both Tropics, heading down to Gibraltar then Cape Horn, before heading back up to Polynesia, Australia, India, the Suez Canal and finally Savona. Along the way Costa Luminosa will call at some wonderful destinations, such as Casablanca (Morocco), Salvador and Rio De Janeiro (Brazil), Buenos Aires (Argentina), Punta Arenas and Valparaiso (Chile), Easter Island (Chile), Tahiti (Polynesia), Auckland (New Zealand), Sydney, Melbourne and Perth (Australia), Mumbai, Goa and Cochin (India), Colombo (Sri Lanka), Dubai (United Arab Emirates), Muscat (Oman) and Aqaba (Jordan). Anyone not lucky enough to be travelling on this incredible voyage on Costa Luminosa can follow it on the Costa Cruises website (https://www.costacruise.com/usa/costa_luminosa.html), via the two live webcams installed on board.

Another highlight of this cruise will be the stops of several days in many of the itinerary’s destinations, giving guests the chance to enjoy the atmosphere in these far-flung locations to the full on the wonderful shore excursions offered.

In Casablanca they can take a thrilling excursion exploring the city’s more modern and cosmopolitan side, travelling along Boulevard Moulay Youssef, one of the city’s main thoroughfares, to the Hassan II Mosque, the largest mosque in the world after Mecca. Back on the seafront they’ll head through La Corniche with its chic shops and restaurants. And it will be in one of these restaurants that they can try some traditional local food, a heady mix of flavours, fragrances and colours, with some Arab-Andalusian music and traditional dance for entertainment.

In Rio De Janeiro they can head off by jeep and explore the city’s most beautiful sights, from the Statue of Christ the Redeemer, the world-famous symbol of Brazil, to the panoramic spots of Boa Vista and Vista Chinesa, passing through the Tijuca Forest, the largest urban forest on the planet. Guests can walk through it in the company of a guide, admiring the splendid Waterfall of the Monkeys before returning on board.

One of the most fascinating tours that Costa offers is during the stopover at Ushuaia, with a four-day excursion taking in two of southern Patagonia’s main attractions: the Perito Moreno glacier and the Torres del Paine National Park. Guests will head south from Ushuaia on a short flight, where this unforgettable experience begins: after a traditional dinner and a good night’s rest, they can admire the 250 km2 Perito Moreno glacier, the third largest natural reserve of fresh water in the world. The third day will take them on a visit to the Torres del Paine National Park, now a UNESCO biosphere reserve thanks to its numerous glaciers, lakes, rivers and valleys. The western side of the park will be the main event of day four on this excursion, with a trip to Del Toro Lake, the park’s largest, with lots of panoramic observation points. The tour will end at Punta Arenas, from where they’ll head back to Costa Luminosa.

There are plenty of tours too for the more adventurous passengers: an exciting helicopter tour on the long stopover at Papeete, flying over the capital’s lagoon and the sea around Tahiti, from where they can admire the coral reef, the white sand, and the lush green valleys and mountain tops, or an adrenaline-inducing climb up Harbour Bridge in Sydney, walking approximately 1500 metres along a series of walkways, stairs and arches on a three-hour tour.

And finally, to see the shores of Dubai from the air, Costa offers a premium tour by seaplane flying at 1,500 feet, where guests can enjoy seeing the city’s magnificent skyscrapers from a privileged viewpoint. This totally exclusive tour will give them the chance to observe the historic Dubai Creek, Palm Jumeirah, Hotel Atlantis, Hotel Burj Al Arab, Burj Khalifa, The World Islands and many other attractions from on high.