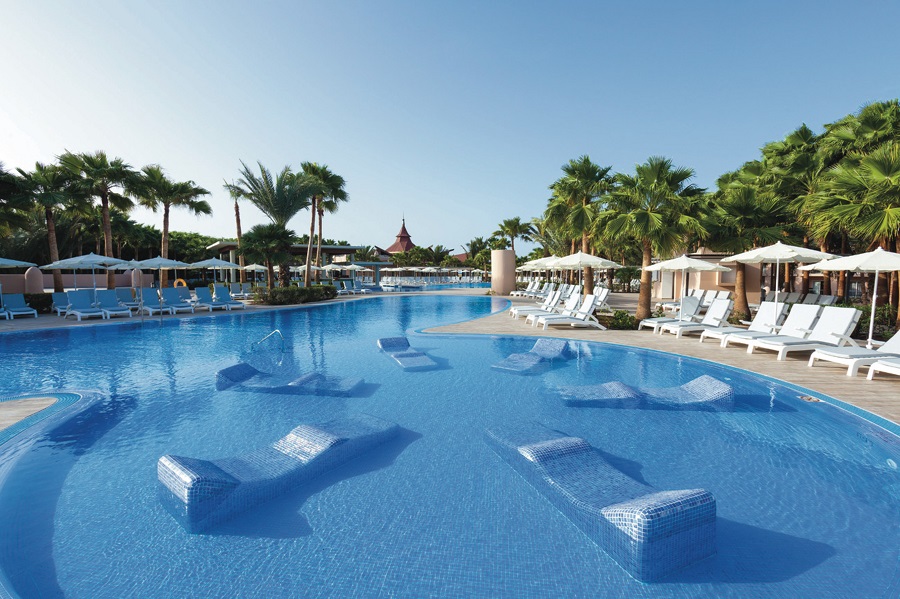 RIU Hotels & Resorts reopened its two first hotels in Cape Verde on the 4th after a complete renovation.

RIU Hotels & Resorts reopened its two first hotels in Cape Verde on the 4th after a complete renovation. The ClubHotel Riu Funana, built in 2005, reopens transformed into the luxurious Riu Palace Cabo Verde, becoming the first in the country in the most sophisticated range of RIU products; in addition, the ClubHotel Riu Garopa, from 2006, is now the new ClubHotel Riu Funana, which also offers new style and amenities.

The two hotels, which feature RIU’s renowned 24-hour all-inclusive service, are located directly in front of a lovely and vast white-sand beach. Its original construction included many unique elements. Its arches, mosaics, wooden ornamentation and columns were designed as an homage to local culture and have now been combined with fresh and luminous decoration, in addition to furniture with clean, simple lines. All to create an attractive overall effect that combines the best of the original hotels with the freshest design ideas in its spaces and amenities.

The most important transformation was undoubtedly that of the former ClubHotel Riu Funana, which has risen in category and been renamed the Riu Palace Cabo Verde. Its 500 rooms and suites, including bathrooms, have been completely renovated, and its decoration combines light and warm colours with a bold red. The hotel will now have two completely new restaurants. Krystal, which offers an appealing menu of fusion cuisine, exclusive to Riu Palace hotels, and the Italian restaurant Sofia; these join the main restaurant, the Asian restaurant, and the steakhouse. In addition, the hotel has a total of seven bars, including the new Capuchino café and pastry shop. Guests at the Riu Palace Cabo Verde will be able to enjoy the children’s facilities in the neighbouring ClubHotel, as well as the shows and live music in its theatre.

For its part, the ClubHotel Riu Funana, the former Garopa, also offers new style and amenities after its renovation. The 572 rooms have been redecorated and furnished with the fresh, contemporary style that RIU stamps on all its new projects. The renovated hotel will also have a new access to the beach and new amenities, like the Kulinarium restaurant, a modern gastronomic concept that uses mainly fresh local ingredients and novel culinary techniques. This joins the three restaurants and six bars that guests can enjoy as part of the 24-hour all-inclusive programme.

In this renovation, which is part of the chain’s plan to modernise its resorts, RIU has invested a total of €37 million. Once reopened, RIU expects to surprise its most loyal customers which, in the case of these two hotels, come mostly from the major European countries. These guests greatly value the easy access from their home cities thanks to direct flights, its dry tropical climate with many days of guaranteed sunshine, its beaches and the warmth of its people.

RIU Hotels & Resorts was one of the first international hotel chains to invest in Cape Verde and believe in the country as a tourist destination. Eleven years after the opening of its first hotel there, the country has surpassed all of the company’s expectations and continues to be considered a destination with great potential. The RIU project in this archipelago is firm and strong, and will remain as such in coming years. This month the Riu Touareg, located on the island of Boa Vista, has been expanded.