The Official Route of the Tour de France 2015 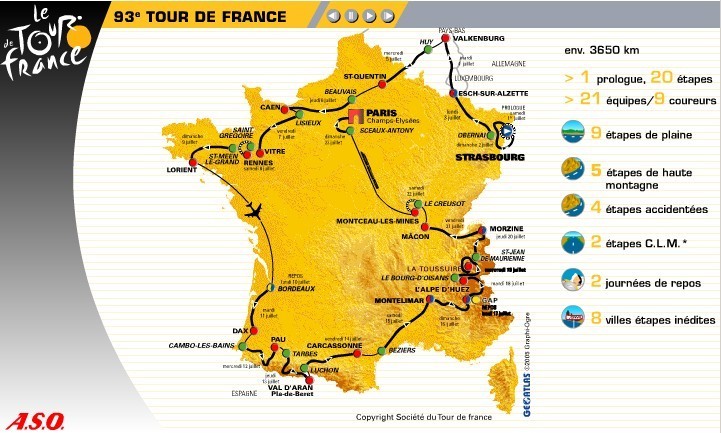 The 102nd Tour de France will begin for the 21st time outside of France, in the city of Utrecht in the Netherlands. Stage one will be a short 13.7km individual time trial within Utrecht to kick-off the Tour, before the race moves on to spend two days in Belgium, as it moves its way to France.

The cobbles will make a return to the Tour for the second year in succession, with the organisers including 13.3km of pavé over seven sectors on stage four between Seraing (Belgium)and Cambrai (France). Wet weather made the 2014 cobbles stage a dangerous affair for the riders, who will be hoping the weather sets fair to make this tough 221km stage less risky all round, cyclingweekly.co.uk reports.

The first week of Tour de France 2015 has a very classics feel to it, as stage three finishes for the first time ever on the climb that culminates La Fleche Wallonne, the Mur de Huy. Meanwhile, the Mûr-de-Bretagne will also favour punchy riders as it provides a tough uphill finish to stage eight, featuring for the first time since Cadel Evans won there in 2011.

A unusually late team time trial on stage nine will be an unexpected hurdle for teams, but it is only a prelude to where the serious GC racing will being after the rest day on stage 10, with the 2015 Tour’s first summit finish atop La Pierre Saint-Martin, which features for the first time in the race’s history.

Three days in the Pyrenees (July 14-16) will be followed by a series of transition days across the southern edge of the Massif Central (July 17-19) which will include a finish on the fast and punchy ‘Montee Laurent Jalabert’ above Mende.

Alpine summit finishes at Pra Loup and La Toussuire (where Chris Froome fatefully attacked Bradley Wiggins in 2012,  the penultimate day of the race is a short stage of 110km ending on Alpe d’Huez.

As usual, the Tour de France 2015 will culminate on the Champs-Élysées in Paris for a sprinters showdown. The 107km stage starting in Sèvres will take in all the historic landmarks of France’s capital, and will provide an apt bookend to what looks to be another exciting Tour de France.

Low-cost airline launches £99 flights from London to the US