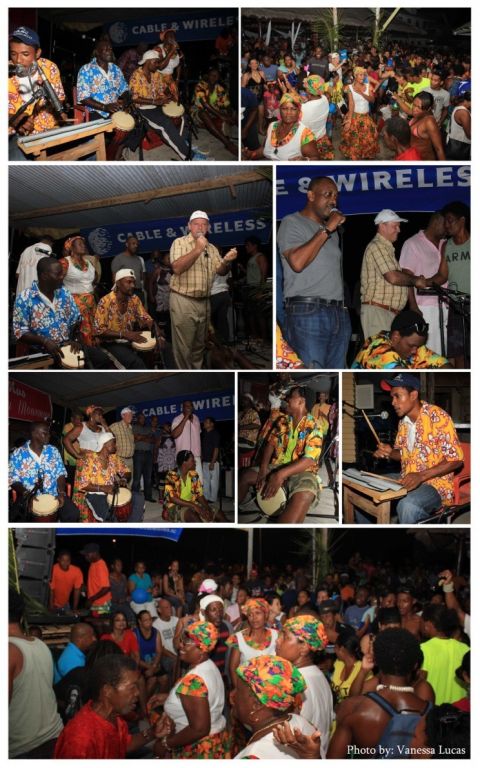 The beat of the drums, the warmth of a bonfire and the powerful voices all made it a moutia night to remember on La Digue island, as young and old alike danced the night away with the vibrant songs which spiced up the night.

The beat of the drums, the warmth of a bonfire and the powerful voices all of Dimans Moutya made it a moutia night to remember on La Digue island, as young and old alike danced the night away with the vibrant songs which spiced up the night.

Diguois and visitors to their shores had packed the island’s Taroza restaurant last Saturday night during a seance of moutia by the Seychelles Musicians Associations, a team of artists who have made their mark with the popular Dimans Moutia (‘Dimans Moutya’) event they have been staging on a regular basis since last year.

Happy with the turn-out, Tourism and Culture Minister called on the Diguois and all who had joined in the moutia to keep appreciating their culture.

Minister St.Ange congratulated the island’s residents for putting the effort in making the Feast of Assumption the success it deserved to be. The Minister said as he addressed the thousands present that La Digue Island should be congratulated for bringing forward and embracing the importance of our Seychellois culture.

Minister St.Ange added that religion was also part of our tradition and culture as he thanked the Roman Catholic Church, Bishop Denis and Fr Francis for the great 15th August Mass and congratulated the large number of pilgrims who filled the church for that 9am Mass.

On his part Minister for Natural Resources Peter Sinon who was also gracing the festivities on La Digue with his presence, joined Minister St.Ange on stage that night to say a few words.

He firstly congratulated the residents of La Digue for their warmth hospitality, adding that the island is a ‘champion’ on this.
Quoting the lyrics of an old-time favourite song by famous songwriter and musician Patrick Victor,
‘Ti annan en konplo pour detri tou’ referring to the time in our historical past when laws were passed to stop the passing of messages through the moutya drums.

Minister St.Ange told the press at the event that tourism is now culture and experience and no longer just sun, sea and sand. The Minister went on to appeal to everyone to support the Seychellois Artists and to encourage them by joining them in their shows and popular dance evenings and for tourism establishments to contract more local groups to perform in their respective establishments.

The Russian Ministry of Foreign Affairs recommended that Russian citizens refrain from traveling to Estonia due to restrictions, the violation of which provides for fines and prison terms. “In connection with...