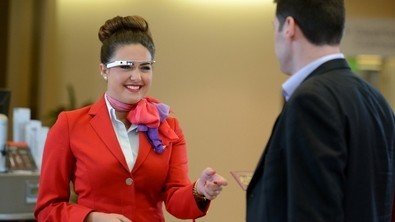 Virgin Atlantic passengers will be the first air travellers to experience the benefits of pioneering Google Glass technology as they arrive at London Heathrow airport, in an innovative pilot scheme which starts on 11th of February.

Virgin Atlantic passengers will be the first air travellers to experience the benefits of pioneering Google Glass technology as they arrive at London Heathrow airport, in an innovative pilot scheme which starts on 11th of February. Concierge staff in the airline’s Upper Class Wing will be using Google Glass and other wearable technology to deliver the industry’s most high tech and personalised customer service yet.

The cutting-edge technology is being introduced as Virgin Atlantic publishes the results of a major study of 10,000 airline passengers from across the world on the future of air travel . The results show that as the number of people travelling by plane has sky-rocketed in recent decades, the experience has lessened. Virgin Atlantic is joining with passengers and calling on the industry to introduce more innovations and radical fresh thinking to meet sky-high consumer expectations.

Virgin Atlantic, working with air-transport specialist SITA, is the first in the industry to test how the latest wearable technology, including Google Glass, can best be used to enhance customers’ travel experiences and improve efficiency. From the minute Upper Class passengers step out of their chauffeured limousine at Heathrow’s T3 and are greeted by name, Virgin Atlantic staff wearing the technology will start the check-in process. At the same time, staff will be able to update passengers on their latest flight information, weather and local events at their destination and translate any foreign language information. In future, the technology could also tell Virgin Atlantic staff their passengers’ dietary and refreshment preferences – anything that provides a better and more personalised service. During the six week pilot scheme, the benefits to consumers and the business will be evaluated ahead of a potential wider roll-out in the future.

While overall, 42 per cent of travellers worldwide – rising to 53 per cent in the UK – said flying is less glamorous than it used to be, there was a clear opportunity for innovations in technology to turn this around. When asked what would improve their experience of flying in the future, 55 per cent saying that wifi on board would be the most appealing aspect, second only to bigger windows and more space on board (60 per cent). Almost a third of UK passengers (30 per cent) say they would like to see personalised menus that you can order in advance and 19 per cent wish for electronic boarding passes that don’t have to be printed every time you fly – a dream that’s already a reality for mobile users on Virgin Atlantic.

The study also reveals that some aspects of the flying experience have improved, in particular passengers relish the opportunity to catch the latest box office hits at 35,000 feet. The times when the only entertainment was looking out of the window are behind us, with 41 percent of UK passengers saying their favourite aspect of flying is the in-flight entertainment system, a feature pioneered by Virgin Atlantic for business class passengers back in 1980s and now available to all passengers. Across the world, only Japanese passengers said that they prefer the free drinks (47 per cent) over the in-flight entertainment (39 per cent).

Beyond the flight itself, passengers also want the air industry to push ahead on improving planes’ environmental impact. Aircraft run on environmentally friendly fuel such as biofuel or solar would be appealing to 68 per cent of UK travellers, and almost three quarters (73 per cent) would like to see – or hear – significantly quieter planes.

Virgin Atlantic continues to push the boundaries with other technological advancements, including testing iBeacon with its Upper Class passengers at Heathrow, a new low-powered Bluetooth transmitter that can notify nearby iOS Apple devices of nearby services, discounts and updates on their flight boarding schedules. In addition, Virgin Atlantic’s newly enhanced mobile site means passengers will be able to book flights, check in online and check their flight status on the move, while also having access to the vast range of information on the main website, including destination and airport guides as well as details of baggage allowances and much more.

Neste and All Nippon Airways are entering a sustainable aviation fuel (SAF) supply agreement. This groundbreaking partnership will see ANA become the first airline to use SAF on flights departing from Japan and also...