Only German Airline with an Aircraft Decorated for Christmas

Every single day airberlin provides connections between individual people and whole continents. airberlin is once again operating its aircraft decorated in Christmas livery under the motto “Flying home for Christmas”. The Boeing 737-800 will continue to be out and about on the airline’s European route network right into January. Anyone who flies home for the holiday season with airberlin on a regular basis has a good chance of travelling in the festively-decorated aircraft. The inaugural flight for airberlin’s aircraft decorated for Christmas will go from Dusseldorf to Copenhagen. “I am delighted to have the opportunity of operating the first flight this year in airberlin’s Christmas colours. It’s always a special occasion, bringing flight guests home to their families and friends in airberlin’s Christmas aircraft,” First Officer Andreas Graute explained.

This year the design of the Christmas plane resembles a string of fairy lights. There is a candle-like light for each day of Advent. “The windows of the aircraft constitute the flames of the candles. For the first time we have a Christmas design that achieves a completely different effect at night to that created during the daytime. The aircraft has an especially atmospheric ambience on evening flights,” said André Rahn, Senior Vice President Marketing. The design was created by RAPP Germany. The interior of the plane is also decorated in festive mood with specially-designed headrest covers.

The Boeing with the registration D-ABMS, which is affectionately known as “Merry Santa”, arrived at Hangar 7 at Dusseldorf Airport on 13th November. First of all, the fuselage of the aircraft was thoroughly cleaned. On 14thNovember the seven-man airberlin technik team started work. The first step was to once again clean all the surfaces to be decorated with special detergent. Next the sheeting, which is certified for aviation and specially UV-resistant, was mounted on the fuselage of the aircraft. Finally, an edge sealer was applied to the leading edges in order to prevent the sheeting from peeling away and to guarantee optimal airflow. The sheeting with the fairy light design is just 80 micrometres thick, measures 15.32 m in length and is 1.87 m high. 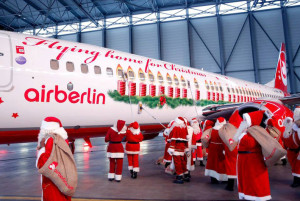