The “world’s largest building” has opened in southwest China

Boasting its own artificial sun and a floor area three times that of the Pentagon, the “world’s largest building” has opened in southwest China to mixed reviews from its first visitors. The towering 100-metre (330-foot) high New Century Global Centre, which is said to to be big enough to hold 20 Sydney Opera Houses, recently opened its doors Chengdu. 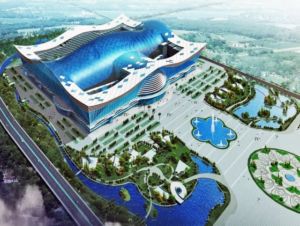 The complex, which Chinese officials say is the world’s largest standalone structure, is 500 metres long by 400 metres wide, offering 1.7 million square metres of floor space. But the first wave of visitors were divided over the attractions of the the structure, which houses 400,000 square metres of shopping space, offices, conference rooms, a university complex, two commercial centres, two five star hotels, and an IMAX cinema.

The Global Centre has a marine theme, with fountains, a huge water park and an artificial beach, accented by the undulating roof, meant to resemble a wave.

The centrepiece is a 5,000 square metre artificial beach, which includes a rafting course and a “seafront” promenade, complete with parasols and seafood outlets that can accommodate 6,000 people.

Beijing International Airport is the world’s most delayed airport