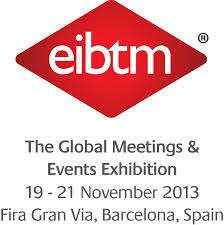 EIBTM, the global event for the meetings and events industry, has announced that the Sustainability Stand Award will feature again this year as part of a wider strategy to encourage exhibitors to take a sustainable approach to their participation in the show, which will take place in Fira Gran Via, Barcelona from 19th-21st November, 2013.

Judged by an expert independent panel, the Sustainability Stand Award recognises exhibitors placing the most emphasis on sustainability at EIBTM. Switzerland Convention & Incentive Bureau were named as the winner of last year’s Sustainability Award due to their demonstration of best practice and leadership in the field.

The Switzerland Tourism stand at EIBTM 2012 was created using sustainably sourced wood and low energy lighting, and had been recycled at exhibitions for the previous three years, with a view to it being in use a further five years. Staff on the Switzerland Tourism stand were also encouraged to attend sustainability related education sessions and bring less literature during the event.

EIBTM 2013 will take place from 19th – 21st November, a week earlier than in previous years. The EIBTM Forum will take place the day before the exhibition on 18th November. – See more at: https://www.traveldailynews.com/news/article/55664/sustainability-focus-at-eibtm-2013#sthash.eTJMtgpB.dpuf

First Hilton in the Baltics Expected To Open in 2016