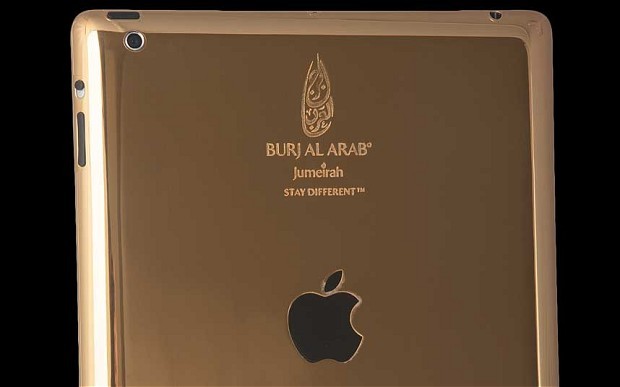 Guests at the self-proclaimed world’s most-luxurious hotel, the Burj Al Arab in Dubai, are being bestowed with a new privilege on arrival – a gold-plated iPad.

Guests at the self-proclaimed world’s most luxurious hotel, the Burj Al Arab in Dubai, are being bestowed with a new privilege on arrival – a gold-plated iPad.

As lesser hotels struggle to provide free wi-fi, guests at the Burj Al Arab, one the world’s tallest hotels, are being offered one of the 24-carat devices, worth £6,715, upon check-in, telegraph.co.uk reports.

While the “bling” equipment may be deemed a little showy for some tastes, the iPads are specially engraved with the name of the hotel and contain software that acts as a “virtual concierge”, offering information on the hotel’s many services which include private dining experiences and a butler.

The hotel said it had introduced the gold iPad, “the ultimate in luxury accessories”, as a way of making itself stand out from its competitors. It also frequently refers to itself as a “seven-star” property.

The limited-edition Gold-Plated iPad is designed by Gold & Co. Guests need to return it on checking out.

The hotel has also recently installed iMacs into all its suites – an item that can also be found in much cheaper hotels however, such as the Mama Shelter in Paris.

The addition will be welcomed by the kind of high-spending guests that frequent the hotel’s Royal Suite, a 8,395-square-ft room located on the 25th floor.

Inside are marble floors, mahogany furniture, Hermes toiletries, a private cinema and a rotating four-poster bed. Guests can also make use of a chauffeur-driver Rolls Royce or helicopter (at extra cost).